What Fresh Hell Is This/Trump Has COVID-19 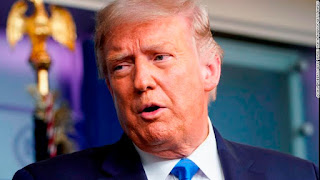 President Trump has COVID-19. In some ways I'm surprised he did not contract it sooner considering he took almost no safety precautions (he almost never wore a mask, as we saw, and so forth). Still, this is dangerous as if he barely has symptoms and recovers easily he'll be able to brag how it clearly is no worse than the flu (which is false). If he dies, he'll become some kind of beloved martyr and the election will be even more of a hot mess than it currently is. I see some people wishing him ill online and I think that is foolish. I want him to recover so he can be elected out of office this November and then hopefully end-up in prison for all his crime not too much time later.

Trump dying will only embolden his followers and they won't even believe it was COVID-19 and take it seriously if he does die--they'll create a conspiracy theory along the lines of QAnon that Democrats poisoned him or something absurd. I don't know how this will impact any upcoming debates (the most recent one was a shitshow) and this is just a huge flustercluck, to put it in a cute less-sweary way. I hope Trump recovers as he doesn't deserve to be immortalized or remembered fondly as Presidents who died in office are. He needs to live a long life and as I said, much of the rest of it needs to be locked-up for his treasonous acts. The election can't come soon enough because what else could 2020 hold?