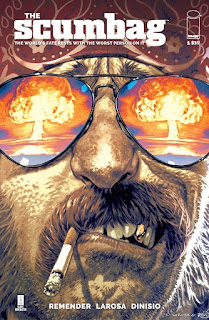 A dark comedy with a twist of espionage from writer Rick Remender and a different artist each issue in an interesting twist (Lewis LaRosa illustrates the first), "The Scumbag," is hilarious and a bit pitiful to read. Ernie Ray Clemintine is a man almost anyone who meets hates. He's rude, crude, on enough drugs its surprisingly he's alive, and is just a jerk. He also ends-up literally stumbling into the membership of a big spy organization and now one of the worst people on planet Earth has to save it, as we learn.

"The Scumbag," is darkly funny, with Clementine being such an abhorrent individual that in order for him to do any kind of good it has to greatly benefit him--and even then he might screw you over. LaRosa's artwork in great for this debut issue, making Clemintine look suitably worn-down and disgusting, as the text of the comic describes him to be. It takes until the end of the issue for the spy-shenanigans to really get going, but I'm thinking it'll be pretty fun to witness Clementine expected to play the hero when he really just wants to follow his own agenda. Pick the issue up this week (it comes out tomorrow) and give it a read, it's worth trying out!