"The Shadow Over Innsmouth: Part One," Imparts an Impressive Horror-Vibe 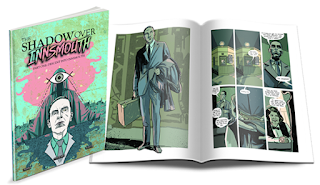 The other day I was emailed by Simon Birks of Blue Fox Comics--a small indie comic publisher based out of the UK. He was one of the creators of, "The Shadow OVer Innsmouth," a comic that was being published in three parts with a collection of the issues due later on. They'll be running a Kickstarter campaign soon and were wondering if I'd be kind enough to review the first issue/part. I get random solicitations from time to time, but I wanted to review this first part of, "Innsmouth," as it quite impressed me!

The comic follows a gentleman named Robert Ormstead as he heads on his way from Newburyport to Arkham. He wants to go the cheapest way possible so he'll need to take a bus through a town often spoken of in hushed whispers, Innsmouth. The comic is heavily inspired by the mythos of HP Lovecraft and for this reason, comparisons are inevitable to another massively popular pseudo-adaptation that garnered lots of attention in recent years, Alan Moore and Jacen Burrow's series, "Providence." I am pleased to report that while both works riff on Lovecraft's immense mythos, these series are quite different from each other, only alike in how they (and Lovecraft himself) deal in an immense feeling of overwhelming dread. 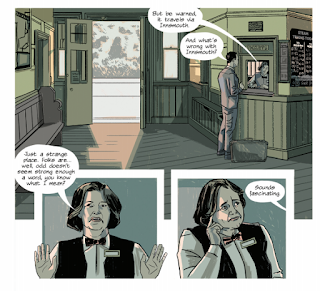 As Ormstead learns more about Innsmouth and its possible terrors we readers feel increasingly ill-at-ease with things only getting worse once he hops on the bus and the horrors begin. The tone of writing and the artwork both express these feelings of fear and terror well, leaving me eager to see where the next issue/part will take the story. "The Shadow Over Innsmouth: Part One," is definitely worth a read.