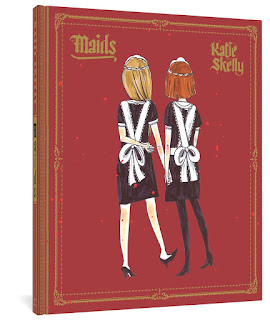 Katie Skelly is a damn fine artist and a skilled storyteller. Whether she's giving us the tale of a vampire causing a ruckus or regaling us with yarns about a sexy spy agency, Skelly's comics are a delight. Her latest release, "Maids," is interesting in that it is a mixture of non-fiction (with embellishments) and horror. Skelly takes the very real case of the Papin sisters--two French maids who murdered a mother and daughter they worked for--and morphs it into a tale of class warfare and psychosis.

Throughout the Fantagraphics-published, "Maids," tension slowly builds, with it clear Christine and Lea have a deep well of rage bubbling up in them. Is it warranted for their horrific long hours and abusive conditions? Are they insane? Could it be a mixture of both madness and legitimate anger led to the gruesome results? Skelly doesn't outright point to one reason, but does make it clear a darkness was always present in the sisters; a darkness not helped by terrible employers. 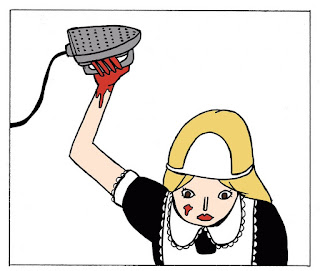 Skelly's artwork always has a colorful and flowing appearance, which makes it all the more shocking when things turn violent and grotesque. Skelly doesn't shy away from how nasty the murders were but also doesn't bathe the book in blood--instead giving a hint of the gore to come at the opening and then saving the closing pages for the gruesome murders. We are outright told they are coming on the back of the book, leaving the final result never in doubt, but watching the slow way the violent climax sneaks-up is wonderfully tense and with Skelly's amazing artwork it is always great to look at.

"Maids," is another phenomenal work by Katie Skelly and serves as yet another example of how she is among the most talented folks currently making comics. Both beautiful and grotesque, "Maids," is a must-read for those into true-crime, horror, or simply great comics.