"Runaways," is Back this Week! 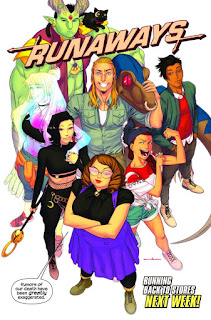 One of my favorite ongoing comics is the current, "Runaways," series. Writer Rainbow Rowell has been amazing on the book since 2017 and I was worried that it was stealth-canceled. This is because an issue had not come out since the comic shutdown due to COVID-19 in March. Well, pleasant surprises are lacking in 2020, but we just got one--issue #32 is actually coming out this Wednesday, October 28th. Hopefully, this means other solicited issues will soon follow and we'll be seeing future ones in Previews before long. Considering how the book is more of a sleeper hit than a big seller I was worried it would be like other titles I love with a smaller readership and get canned (Marvel and DC can be pretty harsh that way). That isn't the case for now, though, so I'm overjoyed!