Jon Favreau is Getting His Own Action Figure 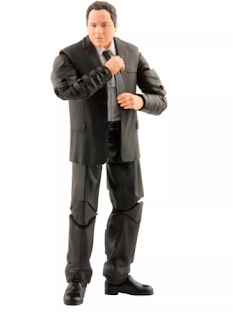 Jon Favreau is a skilled director and actor. He can liven up an otherwise dull movie ("Couple's Retreat," benefits greatly from his presence) and usually makes some damn good flicks ("Chef," is fantastic). He also was there on the ground floor of the Marvel Cinematic Universe. He directed the first and second, "Iron Man," movies and appeared in them (and other Marvel flicks) as Happy Hogan. Favreau has been busy doing the showrunning for, "The Mandalorian," lately so he basically made the Marvel Cinematic Universe possible and brought us a renewed interest in the Star Wars Universe (after the ninth movie a lot of people thought the franchise was maybe dead in the water till Mando saved it). Considering all he has done I am happy we are getting a Jon Favreau action figure!

Yes, it technically is a, "Happy Hogan," action figure, but in the same way Robert Downey Junior is Iron Man, Favreau is Happy Hogan. I am excited that a man to whom Disney owes so much (again, he birthed the MCU and saved Star Wars) is going to get a cool figure. I know I want one and will probably preorder it from Target...even though it is a hefty $50 as it comes with an Iron Man suit too.