My Friend Eric S. Hawkins is Doing a Kickstarter for, "The Zombieful World of Oz," #3 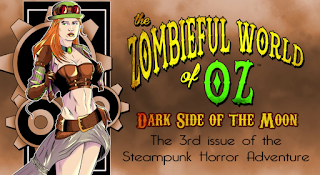 I chatted with Eric Scott Hawkins at the recent Big River Comic-Con and he told me there about how he would soon be launching a Kickstarter campaign. Well, that Kickstarter has started and it is for the third issue of, "The Zombieful World of Oz." It's a steampunk and horror-influenced take on, "The Wizard of Oz," with a grown-up Dorthory Gale dealing with a whole bunch of mayhem now occurring in the magical land. It looks really fun and there are backer levels to catch up any readers who have missed earlier issues--something I always appreciate seeing as it is awkward when you see a Kickstarter campaign for the later issues of a series with no way to read earlier ones! I'd encourage you to check out the Kickstarter for, "The Zombieful World of Oz," #3, and to consider giving it your support!