The, "Invasion from Planet Wrestletopia," Kickstarter is Happening 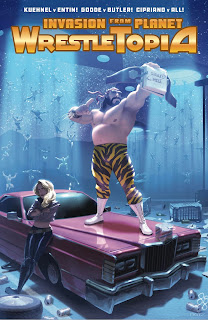 I've previously written about liking the comic, "Invasion from Planet Wrestletopia." It is a fun blend of sci-fi, action, and humor. I was excited to get a press release announcing how it has begun a Kickstarter campaign for a trade paperback that collects the entire mini-series (plus bonus material). The plot follows a wrestler named “Rock ‘n’ Roll” Rory Landell who on a lark declares himself the, “Galactic champion of the universe." However, that sparks an actual intergalactic war with a planet of aliens for whom wrestling is their way of life. Mayhem ensues. Assuming the rest of the mini-series is as good as the first two issues this is bound to be a great read! I'd encourage you to check out the Kickstarter and support it should you find your interest piqued!