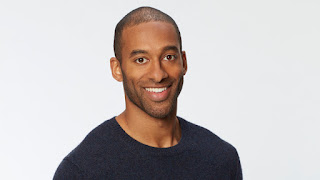 It took 18 years and over 20 seasons, but, "The Bachelor," is going to cast its first Black Male as the titular, "Bachelor." His name is Matt James and he will be the second person of color to assume such a role as Rachel Lindsay was, "The Bachelorette," and also is Black. The fact she was treated somewhat poorly by production compared to other Bachelorettes has been well-chronicled by media outlets and Lindsay herself. This is why I am both excited for Matt and worried for him. I want him to have a great season and have the show not be afraid to address race, but I don't want the only thing about Matt people find interesting that he is the,"Black Bachelor."

On my blog (where you are now), I often express both an affinity for and heavy criticism of, "The Bachelor." It is a guilty pleasure of a show and at times makes a smart or deep statement, but just as much is a mess of cliches and outdated views on how love and relationships work. I would like, "The Bachelor," to have Matt's season be one of maturity that has his race as an important element of who he is, but not all Matt is. We can't ignore that it has taken ABC almost two decades to have a Black Man as the Bachelor and that it took a lot of speaking-out from past participants and fans for such a thing to happen. We also shouldn't make the whole focal point that, "Hey, this guy is Black!"

Sometimes I get flashbacks to Colton's season where the whole focus was how he was a virgin, and that so many awful puns and jokes were made about it. I would think, "The Bachelor," wouldn't be so crass as to turn Matt's race and his status as the first Black Bachelor into a punchline or running gag, but this is, "The Bachelor," we're talking about. Basically, I want this show that at times shows so much potential to examine relationships in a complex way to fulfill that very potential instead of taking one step forward followed by 10 steps back. This is a show that's had one same-sex couple--on a spin-off ("Bachelor in Paradise)--and had one other person of color as the lead (and she did not enjoy it that much). It is 2020, and, "The Bachelor," needs to catch-up with the times, in other words. I sincerely hope when Matt's season happens in 2021 (we still need Clare's, "Bachelorette," season to get rolling amid COVID-19 for 2020) it is the usual enjoyable trash this show provides, but hopefully it can be enjoyable trash that is also progressive and modern.
Posted by David Charles Bitterbaum at 7:30 PM