"Hey, Let's Hold a Rally For My Campaign in the Middle of a Pandemic!" Said the Moron 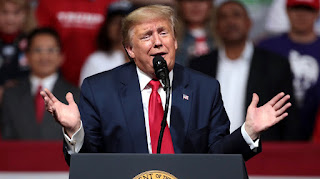 Today, yes today, Donald Trump will be holding a massive Presidential rally in Tulsa, Oklahoma. His idiocy knows no bounds and he has no rock-bottom for shame either. Originally the rally was to be yesterday, but it was pointed out he was holding the rally on Juneteenth in the place where the Black Wall Street Massacre happened. Trump relented--not out of embarrassment, but to act like he was doing us all a favor and raising awareness of the holiday/making it, "Very famous." Anyways, he's going to hold a massive rally today where people will be shoulder-to-shoulder, spraying aerosol particles as they yell. This spraying will occur as masks are not required and basically discouraged. This won't be good.

Nevermind that today it was reported six, count em' six Trump campaign staffers working for the rally have tested positive for COVID-19, let's have a rally! If Trump had any shred of decency he would call this whole thing off, but he probably thinks that would make him look weak. Now, he put himself in this position trying to plan a rally that nobody even expected him to throw, so this is entirely a problem of his own making, like most of the madness his Presidency has brought us. 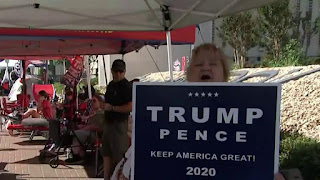 It would go against all reason to think this man could actually be reelected, so let's hope common sense and reason prevail so that by 2021 Trump's out of office and Joe Biden is our President. Then we never have to put up with one of his rallies again--especially in the middle of a pandemic. Vote this election, all you people who didn't last time too, vote!
Posted by David Charles Bitterbaum at 3:16 PM