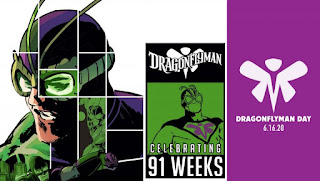 I was a big fan of the mini-series, "The Wrong Earth," naming artist Jamal Igle one of my favorites of 2018 along with the series itself being a favorite mini/maxi-series. It had a clever hook in the same heroes from two universes end-up swapping places so that a campy one ends up in a grim-and-gritty World and vice-versa. It was a bit meta, very clever, and overall fantastic. There has been a prequel series since then, but I can't wait for more tales set after the original book's conclusion.

To mark the character turning 91 weeks old publication-wise they are having Dragonflyman Day on June 16th, with the whole thing clearly being a bit of a joke about how much Dragonflyman riffs on Batman who is himself a quite old character in years when it comes to publication. It is silly and clever, which is fitting for this comic. As a fan of mini-series featuring the character, I'm eager to celebrate his, "Anniversary."
Posted by David Charles Bitterbaum at 4:41 PM