"Spider-Man: Life Story" is a Unique Take on an Oft-Written Hero 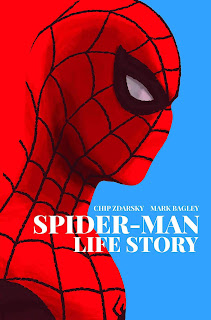 The main hook of, "Spider-Man: Life Story," is to imagine that teenaged Peter Parker got bit by a Spider in the early '60s and then just kept aging in real-time, with each issue addressing a decade up to the 2010s with issue #6 of the mini-series. Chip Zdarsky wrote the mini-series and Mark Bagley illustrated. Zdarsky is a skilled writer (and illustrator) and Bagley has drawn tons of Spider-Man-related comics be they in the Ultimate Universe or regular continuity. This results in a stellar team-up that spins a fantastic yarn which could have come off as gimmicky but works incredibly well.

By letting a number of heroes from the past age whilst introducing the more recent ones within the era they came about the mini-series actually manages to show just home timeless heroes are regardless of the decade they exist within. It also is fun to see how Zdarsky tweaks the long and complicated history of Spider-Man, working in the Venom symbiote and clones but in unique ways along with other classic storylines altered just a bit for a fantastic story. Bagley absolutely nails the artwork too, masterfully illustrating characters as they grow older over the decades along with perfectly encapsulating the fashion and, "Look," of each era. A lesser artist would be unable to draw a half-century of time, but Bagley does it with marvelous ease. 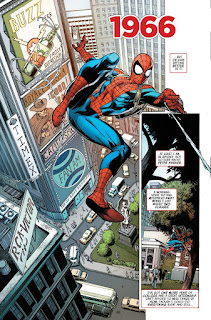 "Spider-Man: Life Story," works as a book for longtime readers of Spider-Man who want to see clever takes on a variety of classic stories as well as a great read for those with only the faintest knowledge of Spidey who are intrigued by the idea of seeing him aged realistically from his earliest appearances. It reads great, looks amazing, and I highly recommend it.
5 out of 5 stars.
Posted by David Charles Bitterbaum at 11:37 AM