Warren Ellis May Prey Upon Women and Engage in Sexual Coercion 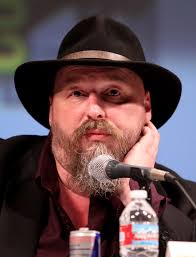 It was being discussed how comic artist Cameron Stewart would sleep with very young women who liked his artwork and who hoped to break into comics. It was discussed as an, "Open secret," that finally was being discussed. While this was being talked about, however, another name I would not have expected to see started popping up. Yes, in news that has gutted me, Warren Ellis may have used his position of power to take advantage of women who desired a friend or mentor and not lewd advances.

I have loved so much of Warren Ellis' work and don’t want to think he’s a creepy predator. It looks like he is. I mean, this is a man whose work I’ve written extensively about and whose creations have meant a lot to me. I feel gutted, but also know it’s nothing compared to what the women he hurt went through. This is just awful all around. Ellis apparently would solicit nudes from fans, be very sexual with women he was supposed to be assisting in the field of comics as opposed to trying to be raunchy with, and also would engage in the tactic of stopping communication and ignoring them once he got bored or would be angry if they started being even just friends with other comic professionals--a common abuse tactic of, "You can only talk to me."

Multiple women are tweeting about this and it is just incredibly upsetting. I believe them, because you would believe women and anyone else who is strong enough to come forward about being mistreated by those in power. I'm just upset because Ellis' work has meant so much to me and this news feels like a punch in the gut. Ellis didn't break any laws, but he was unethical and just plain sleazy, which ain't appropriate. I'm just so shocked and saddened by this news.
Posted by David Charles Bitterbaum at 9:37 AM