News That Excites Me: A Moon Knight Ominbus is Coming! 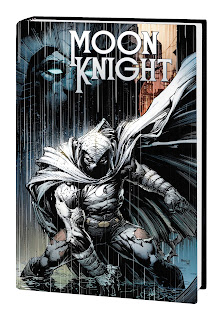 Marvel and DC often do special collections of their comics. One of these is a big hardcover known as an omnibus that collects a ton of comics featuring a specific character, team, or run of comics. Plenty of these have come out in the past and will in the future too, but what caught my eye was some months ago it was said there would be a Moon Knight omnibus. Well, it has now been officially solicited in the latest edition of, "Previews," magazine that we will be getting the, "Moon Knight Ominbus HC Vol. 1." I am pumped!

It will have all of the earliest Moon Knight comics from his initial appearances in, "Werewolf by Night," to popping-up in other stuff like that Hulk magazine or the Marvel Preview magazine, getting his solo tale in, "Marvel Spotlight," and of course his own series proper. I especially like it is labeled as being the first volume as that clearly means more will be on the way. Personally, if they made big ol' omnibus editions of his stuff into the modern era I'd be perfectly happy. These big books ain't cheap--this one will be $125--but it isn't due to come out until January of 2021. I've got plenty of time to put some scratch aside and eagerly await this big book of goodness.
Posted by David Charles Bitterbaum at 5:59 PM