"Turmoil," for the Nintendo Switch is Great Fun! 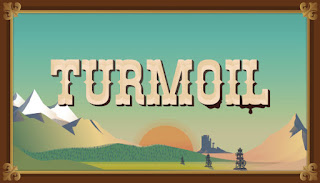 "Turmoil," has come out on other platforms, but it just recently launched on the Nintendo Switch (with what was originally downloadable content included as well). It is a game where you play an oil tycoon in the 1800s who makes deals, bids on land-leases, and drills for oil. It is a mixture of strategy and puzzles as you navigate the business world and then use various tools at your disposal to try and find all the oil you can on a plot of land. It is quite fun too!

"Turmoil," manages to keep a player's attention by also introducing new challenges or opportunities. It'll throw rocks in your way but offer you diamonds, for example. It also maintains a humorous tone throughout the entire game, with fun little things like moles that can help you find oil--it isn't historically accurate but it is cute. It can be a little tricky, yet it never seems absurdly difficult. You even have some competition oil barons, but they generally were not much of a challenge and besides outbidding them for plots of land they don't really impact gameplay too much--this isn't as cutthroat as the movie, "There Will be Blood," where you try and drill into other people's land or anything. 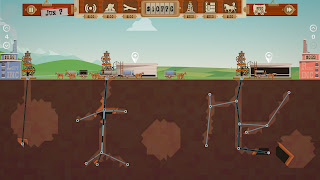 There are different campaigns/modes (including the DLC one that adds a few little features like playing Poker) and it is all good fun. There is just something strangely satisfying about the sound of your drill hitting a big bunch of oil deep underground and starting the process of sucking it up. That alone makes this game recommendable, but all the other fun aspects just make it that much better.
4 out of 5 stars.
Posted by David Charles Bitterbaum at 6:31 PM