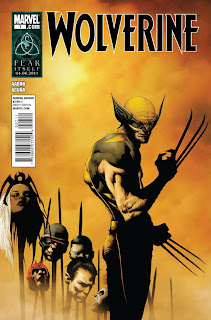 Wolverine #7
I'm not too big on Daniel Acuna, but I'm a fan of Jason Aaron when he's on his game. Can an issue consisting mostly of people just fighting Wolverine satisfy? Yes, apparently.

This is proof that you can make a fight scene cerebral and full of good dialogue as opposed to just punching. Whether it is the demon in Wolverine exploiting one of Magneto's few weaknesses (his emotions), Emma Frost being written in the best way she can be utilized (as the quipping and rude-but-caring badass she is), or some neat representation's of Wolverine's inner-mind and the battle raging within--this is a good comic. True, it isn't utterly amazing because at its core it is just a drawn out fight-scene, but darn if it isn't a fun one. 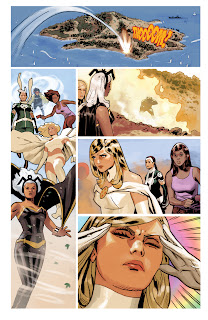 Daniel Acuna seems to genuinely be trying and despite some of his faces still just looking plain weird the action does flow well, so I can't hold that against him. Also, he is a good artist to use when you need trippy or abstract visuals, and nothing is more strange than the inside of the human mind-especially Wolverine's brain. With the surprise appearance at the end of the issue it also becomes clear that we aren't going to be stuck witnessing just a big fight scene spread out over a story-arc, so I'm excited to see what comes next--always a good factor for a comic to have. 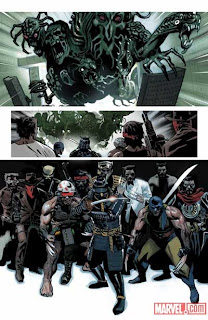 Well written, decently illustrated, and otherwise enjoyable if not incredible, this is some more pleasant work by Jason Aaron that helps make Wolverine a bit more interesting than the usual cliches of his being a tough-guy who heals real fast (See: Best There Is). I just wonder what could be coming next (well, I guess I'm not really wondering because I can just check the solicits, but you know what I mean).
3.5 out of 5 stars.
Posted by David Charles Bitterbaum at 10:00 AM