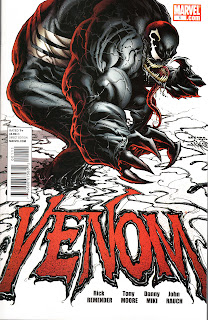 Venom #1
Rick Remender and Tony Moore, the men behind Fear Agent and the Franken-Castle part of Remender's Punisher run have teamed up yet again to present a series about the venom symbiote as a military operations suit worn by Spider-Man supporting cast member Flash Thompson--although you don't need to be reading Spider-Man to follow along. How is the premiere issue? Worth reading.

After being set-up at the new Venom in the Spider-Man #654 back-up and shown on his first mission in #654.1, Flash Thompson gets to just jump straight into the mission this issue, using the Venom suit to bust up some heads. Rick Remender delivers some solid plotting and dialogue, making us see how Thompson truly believes in his country and wants to serve it--as opposed to the new Jack O' Lantern we see whose mysterious boss and he are only concerned with causing chaos and making money. 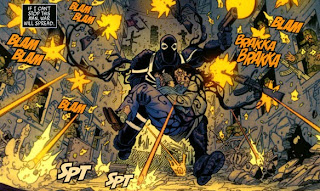 The basic plot is Flash going on a mission to capture an evil scientist who has a dangerous new weapon--cliche I know, but the story itself acknowledges it so that helps--and has to fight through a fictional war-torn Eastern European country to achieve this goal. Things of course aren't that simple and between running into the aforementioned Jack O' Lantern and struggling to keep the Venom suit in control plenty of interesting developments happen. 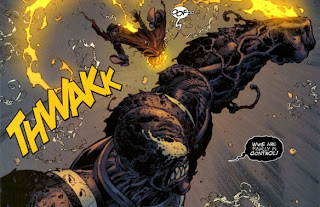 Tony Moore of course turns in some great art as he is known for doing, so there isn't too much I have to write about that other than bravo. Overall this is a solid comic and the concept that Thompson only has a limited number of missions he can go on in the Venom suit means the formula of Remender just showing missions won't happen for too long before something shakes up the status quo--and Remender is a good enough writer I know he won't stick to any status quo for too long anyway (this is the man who made the Punisher a Frankenstein monster after all). Check out this comic, its pretty rad and I really enjoyed it and look forward to future issues.
3.5 out of 5 stars.
Posted by David Charles Bitterbaum at 11:00 AM