It is now time to discuss what looks less than promising--i.e. horrendous--in the latest edition of Previews. As stated, I focus on new things, so the lame series in their 3rd issues won't be mentioned etc. etc. Let's start the tour of misery! 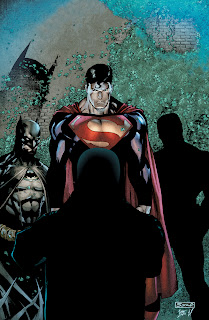 Pg. 89, Brightest Day Aftermath: The Search #1, $2.99
Hey, remember that so-so series Brightest Day I have yet to review on my blog but will get around to doing a big post about? Well, now you can enjoy a spin-off that isn't even written by the biggest selling-point of the series, Geoff Johns! This seems like one of those Final Crisis: Aftermath series nobody picked up with the difference that some of those were actually good (e.g. "Dance"). Who knows, maybe this won't suck, but it doesn't make it feel any more silly considering Brightest Day was originally going to be more issues and it seems this is just coming out to make up for the lost potential money. 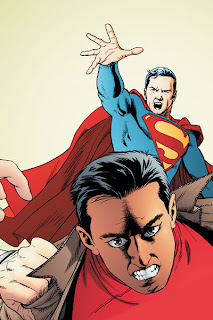 Pg. 101, Superman #712, $2.99
Straczynski was doing a god-awful job on Superman, but just up and quit it to work on the "Earth One" books. He was replaced by Chris Roberson who has been trying his hardest to polish a turd gold. Now we have a story about what appears to be a Muslim or at least Middle-Eastern super-hero that people don't like and Superman trying to help stop people being prejudiced. I swear to God, if we get a, "You know, I'm not from Earth, so I'm a foreigner too," piece of bullshit speech I will know that was the bit Straczynski wrote. Then again, I'm not even reading this series outside of flipping through it at the comic store and marveling at its lameness, so what right do I have to complain? Seriously though, Chris, I do not envy you for the task of taking over this series. 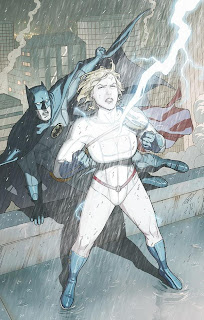 Pg. 107, Power Girl #25, $2.99
The issue in which Powergirl helps Batman defeat a weather-wielding meta-human with the power of her huge bosom, which apparently acts as a lighting-rod. Half of what I just said is in the actual solicitation, you guess which. 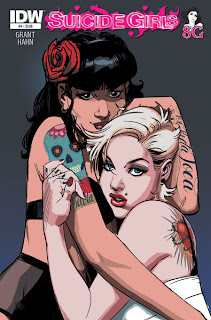 Pg. 160, Suicide Girls #4, $3.99
A comic based off the popular soft-core website of the same name to which I say, really? Perhaps my issue is with Suicide Girls itself. Look, I don't have a problem with pornography, but don't try to market it as some kind of women-empowering feminist thing, because that is just idiotic, and don't act like you are doing females any favors by using women who are "alternative" just because they have tattoos or aren't rail-thin, because at the end of the day you're still making porn even if the starlets aren't your usual actresses. Also, don't think you can make a comic of the Suicide Girls because people are interested in reading some fictional tale about women they just want to see naked, I mean come on people! Que the defenders of the SGs to start burning up the comments section... 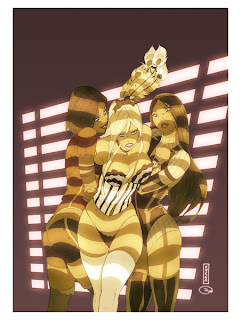 Pg. 287, Route Des Maisons Rouges #5, $2.99
This thing is in its fifth issue and I have yet to call it out? Strange. Anyways, I admire an independent studio like GG for some of its output they have been doing, but this series has just been looking absurd. Its about five competing brothels that are fighting against a "slimy" mayor which of course is just an excuse to show a lot of women in lingerie. Think I've overly harsh? Check out some past promo art: 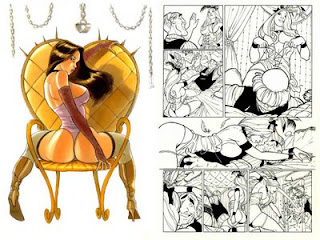 That about sums it up pretty well. 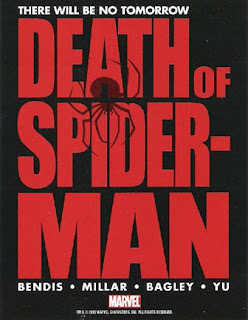 Marvel Book 21, Ultimate Comics Spider-Man #160, $3.99
I went with this image instead of the actual cover solicitation ,because it just has an ugly red spider that you will probably be seeing covering the comic-stands as this issue is apparently going to be poly-bagged just as that Fantastic Four issue where Johnny Storm died was. I love how the solicitation says any details are, "CLASSIFIED," in big capital letters like that, yet earlier ads such as the ones above made it pretty obvious what is happening to the Ultimate Universe version of Peter Parker--i.e. the main Marvel-Universe version one is too popular so they are going to kill-off the less of cash-cow Ultimate one. Oh, there will also be a blank cover which I guess is just a completely black poly-bag, which will make people think you bought a porno-comic probably. 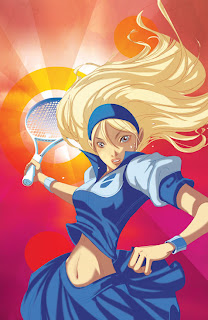 Marvel Book 40, 15 Love #1, $4.99
An older romance comic involving tennis that was apparently never finished--but got close to it--that Marvel found while rummaging through their desk drawers looking for something to publish. Upon finding it I guess editorial decided, "Why not? We can get some suckers to pony up $4.99 for 56 pages!" and the rest is history. 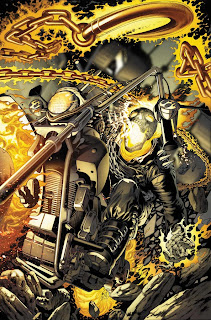 Marvel Book 45, Ghost Rider #.1, $2.99
I am not saying that this comic will be bad, in fact this series could be great. No, I am just annoyed that Marvel is launching the series with a .1 issue. The whole purpose of the .1 initiative is that it makes a good jumping-on point for new readers, and I would argue a first issue already generally is a good place to start for new folk. I think Marvel just wants to swim in the money that a .1 issue followed by a #1 issue can supply. Hell, why don't we throw in a zero issue for good measure, make it a trifecta of stupidity?

Well, that was fun--and by fun I mean painful. I'm going to go to something with more joy to it now than examining the losers of Previews, like my laundry or scrubbing my bathroom tub.
Posted by David Charles Bitterbaum at 6:00 PM