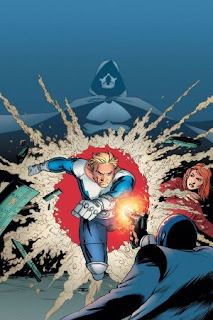 T.H.U.N.D.E.R. Agents #6
I know I just reviewed something by Nick Spencer (the Jimmy Olsen book), but why not cover another great work by him? This series has packed in more plot twists and crazy concepts than I've known what to do with since it started. It's also had a lot of guest artists for various flashbacks, making this issue set all in the present kind of unique. Oh, and it is pretty great stuff.

I've made no secret of my affinity for this series, having discussed in many times, including in the earliest days of my blog that long time ago (I'm being a bit silly, its been months). Still, this series has only consistently gotten better as it has gone along, making me very happy that when Nick Spencer signed his exclusivity deal with Marvel comics there was a deal made that he could keep writing this series--because it is a great one. It has moved being about much more than just, "heroes who die as they use their powers," and is about using evil for good, what makes us human, and how far we are willing to go to achieve a goal. 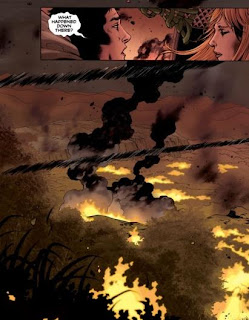 T.H.U.N.D.E.R. Agents may very well be one of the best monthly series DC is putting out right now that doesn't feature any huge-name heroes such as those with a big "S" on their chest, a Bat Logo, A Green Ring, A Lasso of Truth, or a Speed Suit, etc. You owe it to yourself to check out this series and enjoy it. I know I certainly have been doing so.
4.5 out of 5 stars.
Posted by David Charles Bitterbaum at 4:30 PM