Kind of Pointless, And What A Long Title--Avengers: The Children's Crusade: Young Avengers #1 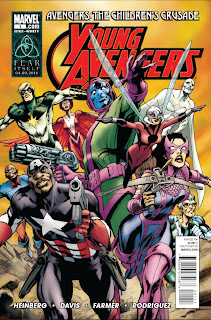 Avengers: The Children's Crusade: Young Avengers #1
Written by the author of the main Avengers: Children's Crusade mini-series and with pencils by the legend Alan Davis you think this would be great or important to the story right? Well, you'd be pretty wrong.

Basically this explains why Iron Lad shows up at the end of Children's Crusade #4 after this story stars in an alternate future/dimension (or something) and flashes back for an extended sequence in the past that seems to serve little to no purpose other than showing that Iron Lad is scared of growing up to become Kang the Conqueror and that The Young Avengers like helping people. Yeah, I just summed up the whole issue for you. 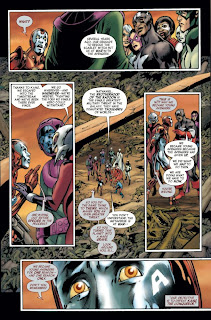 Davis turns in some decent art, but I don't see what the point is of introducting these grown-up versions of the Young Avengers if we spend so little time with them and so much of the story in the past around the start of the main Young Avengers series. Don't get me wrong, I'm a fan of the Children's Crusade series, but this is just beyond ancillary. If you really love Alan Davis or will just die if you don't know every continuity wrinkle in the Marvel Universe go ahead and pick this up, but otherwise there is no point to this competently done,but otherwise utterly purposeless comic.
2 out of 5 stars.
Posted by David Charles Bitterbaum at 5:00 PM