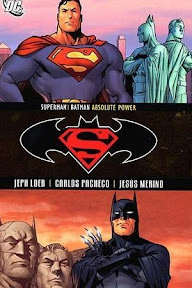 Superman/Batman: Absolute Power
A story from the series that had an extended run by Jeph Loeb before 90% of his work output started to stink. We have here a tale sort-of in continuity and sort-of out of it, as this series always does. I say "sort-of" because in the end everything of course works out to the status quo as things do in super hero comics, but before that occurs we have pretty fun alternate universe tale.
The thing is, I really like alternate-universe tales. I'd be excited for Flashpoint but just can't summon the energy or scrounge up the money to buy all the minis you need for the "full" story. Anyways, it's fun to see familiar faces with a twist--hence my affinity for Marvel's "What-If?" comics and DC's Elseworlds. This isn't an Elseworld's story, but if it weren't for things changing at the end it could be, and that's just fine. 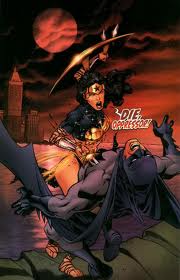 Imagine a world where Superman and Batman rule the world, and evil. Oh, and they jump around to various popular universes and mess with time and reality. Plus it has Uncle Sam of Uncle Sam and The Freedom Fighters wielding a green-lantern power-ring, so that's awesome. 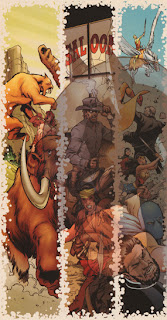 I don't want to spoil some of the twists as that is what makes the comic especially fun, but this was a good time and I would say worth checking out, even if the ending is way too schmaltzy for my tastes with the whole, "We'll remember this valuable lesson and never be the same--even though this arc probably won't be acknowledged again by any other writers." I still had fun though, so I'm satisfied.
3.5 out of 5 stars.
Superman/Batman Vol. 3: Absolute Power

if you want to have a generally good time.
Posted by David Charles Bitterbaum at 9:16 PM