Brightest Is Overstating It A Bit--Brighest Day Volume 1 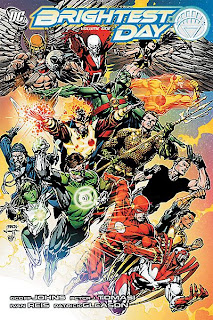 Brightest Day Volume 1 Hardcover (Collecting Brighest Day Issues #0-7)
As we approach the final issue of Brightest Day, the 24th (technically the 25th as that zero issue was pretty much a first issue for the series, but whatever), I feel it might be fun to look at the first collection of the series. In doing so you can see the immediate problems that would plague the series and the good things that would help it.


Let's get the two biggest complaints out of the way first. The zero issue has a lot of characters in it that would go on to pretty much not play any role at all in Brightest Day because the tie-in comics to this main mini-series would cover those character's tales. For example, in Brightest Day issue zero we spend some time with Max Lord who barely ever pops up again in Brightest Day but is integral to Justice League: Generation Lost. Okay, Then there is the second issue. Mainly, the characters don't really find out what their main purpose for existence is, and what goal they have until the seventh issue when variety of pages and one cool multi-page spread spell out what everyone needs to do over the course of this series or their respective titles. So yeah, just when the series starts to take off the book ends, ain't that a real kick in the junk--and not the good kind (if there even is a good kind). Plus, some people who appear in the zero issue don't come back into this series until well after the seventh, so while folk who picked this up at the comic stand may not have forgotten much, if you are waiting months between reading books of this...you may be out of luck recalling what the heck is going on.

Geoff Johns and Peter J. Tomasi are the main writers, and while each character has a pretty interesting story, it seems these tales don't really relate. Instead, we have a book with a bunch of people who are only loosely connected by the fact they were brought back to life at the end of another event and we are seeing their adventures play out separately. As for the art, different people illustrate different segments so sometimes you'll have great looking bits and other times your eyes will feel kind of insulted. The main issue isn't even if the art is good or bad, it is that the styles can clash, making it jarring to go from a page with one story and one style to another page with a completely different look. Normally when books have different artists on a variety of pages I thought they tried to go with a similitude style. I guess that's just me.
Overall, despite my many criticisms I did enjoy this book a good amount and can say fairly confidently that you don't have to read the other series that tied in with it to enjoy the story. They more-so built off of this story than it was a case of you having to buy other books to understand what is going on throughout this series--so at least you don't have to worry about that. If you want to read an event comic you could do worse, and if there is a particular character involved in Brightest Day you love whose adventures you want to follow that would be another good reason to pick this book up (for example, if you love the newly alive Deadman/Boston Brand or Martian Manhunter). It's nothing amazing however.
3 out of 5 stars.
Posted by David Charles Bitterbaum at 11:00 AM