Rant Reviews--War of The Green Lanterns Part One-Three AKA Who Knew The Guardians Bleed Yellow?

I feel extra snarky today so this is going to be one seriously silly review section. Think kind of like how Tucker Stone does his stuff on The Factual Opinion but not quite as funny. Let's review the newest Green Lantern event because 5 months can not pass without a new one happening. This one is, "War of the Green Lanterns," and seems to be about that Rogue Guardian Krona using the entities of light to possess the guardians after beating them up and making them bleed yellow. Which is gross and awesome.

Green Lantern #64
The main Green Lantern title with Hal Jordan, where in order to focus on this being a war of green lanterns we have something called a story vampire suck up the rest of Hal Jordan's rainbow-light brigade into an evil book because hey--reading books that just have text is for losers. Oh, and the person in charge of the book is a story vampire who looks like a cheap knock-off of Vampirella with equally revealing cleavage but a lamer concept in that instead of sucking blood she sucks out your life stories. Oh, how threatening, I'm going to extract that uncomfortable memory of your first romantic experience with that girl at co-ed summer camp who didn't realize your tongue was caught in her braces and you weren't making happy noises, but instead were screaming in pain. Yeah, I'm terrified.

Plus we have the Guardian's sneering as they always do their metaphorical ivory tower before Krona hurls some totems at them that causes them to bleed yellow profusely for seemingly no reason other than that it is gross and awesome, Hal Jordan escapes from the evil book only to confronted by some Green Lanterns who act like the jerks at the bar who think they are cooler than you just because they put twenty-dollars worth of a can of hair-spray on their scalp before going out to the club and ordering the weakest drink possible because they can't handle anything stronger than the most watered-down drink at the club--don't worry though because the rude lanterns are possessed by the Parallax entity which orders them to the planet of Oa for some mysterious reason. Oh, the issue then closes with Krona smiling like a madman while the guardians look like some junior high-schooler's ideas for logos for a heavy metal band as they are now possessed by the entities or something. Geoff Johns is okay with the story but seems to be coasting, and the art is nice enough. The concept of a story-vampire is just so lame though that it drags this down to mediocre.
2.5 out of 5 stars.

Green Lantern Corps #58
This issue is mostly Kyle Rayne and John Stewart fighting and insulting each other but that's just fine because hearing them trade barbs is like watching a good episode of the Jerry Springer show, "Do you even understand?! Or did you forget what it felt like when your wife got murdered?!" Followed by, "You're gonna wish you never said that--" is some great fightin' words. Oh, plus Ganthet gets a whole page dedicated to his hand exploding in a glorious scene of blue skin flying around and yellow blood going everywhere that would have made me spit out my lunch if it weren't late at night before bed when I was reading the comic. Plus, you gotta love the way his scream has bright orange coloring with a green outline. Just look: 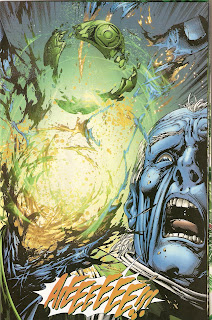 Based on the fun-if-hokey fight and awesomely disgusting hand-explosion I've got to give this comic some props even if there isn't too much to it besides arguing and a hand-blowing up.
3 out of 5 stars.

Green Lantern: Emerald Warriors #8
This is also known as the issue in which Guy Gardner suggestively drinks from an icicle, and yeah, it looks kind of odd. There is more to the issue that than sexual subtext though! There's a bit fight between him and Hal Jordan where they argue like children who want a toy and...well, that's pretty much it. I guess Tomasi was too busy having Gardner and Jordan fly around punching each other before realizing their rings were making them crazy to write anything else. Yeah, this was pretty weak, no wonder them main thing people took away from this issue was Guy Gardner getting way too friendly with that piece of ice. Maybe next issue Frosty the Snowman comes to life and things get really weird!
2 out of 5 stars.
Posted by David Charles Bitterbaum at 8:27 PM