This comic looks promising: Halcyon #1 and #2. 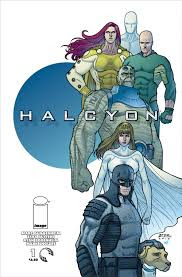 Halcyon #1 and #2
This is an odd comic. I couldn't quite figure out the premise from the first issue but after reading the second I think I'm beginning to understand. One hero got tired of all the crime in the world and used her mind powers to somehow change everyone into less-violent individuals. This results in a world where most heroes aren't really needed. So, we get to see heroes standing around going, "well this is odd," while meanwhile their arch-nemesis has surrendered himself to the authorities and is now doing good--for mysterious reasons if his discussion with his assistant and an alternate-reality version of himself are anything to go by. On a side-note, one clever thing this comic does is that when people are speaking in a foreign language the letter-characters are stretched out and shaped all bizarrely, but are actually still in English. It's a clever effect.
The art is also solid, although Sabre's design seems like a rip-off of Midnighter from Planetary/the Authority--and he was an intentional rip-off of Batman, so Sabre is a rip-off of an homage? The other heroes are bit cliche too; we have the fast-running guy, the Superman-analogue with the only twist being its a female, and a super-smart ape....which is admittedly a bit creative as the only other smart apes I know of are Gorilla Grodd in the comics and those real-life ones scientists train in sign-language. The heroes aren't really the point of the comic though, the idea is what happens when there is no more crime and the most evil man in the world turns good? I'm not quite sure where this will be going, but it looks promising.
3.5 out of 5 stars.
Posted by David Charles Bitterbaum at 12:00 AM