War Machine Volume 1: Iron Heart
I like James Rhodes aka Rhodey. He is an interesting character and a great person, as can be seen by how good a friend he is to other Marvel heroes like Tony Stark AKA Iron Man. Also, he is a man of color and there arguably isn't enough racial diversity in comics. That makes it all the more sad that this is Volume 1 of just 2, as this series re-boot was canceled with issue 12. Why? Let's examine...


This series had some good art, so that wasn't the problem. Observe: 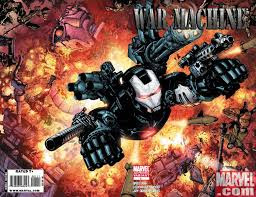 and it tied in with the big Marvel event Dark Reign where Norman Osborn took over the Marvel Universe. Heck, the series even sort of started in a main Iron Man comic as a sort of lead-in to this series. It had a fair amount going for it, so why the lack of success? Well there is the argument that white readers don't want to read about black characters, and that probably factors in, but David Brothers over at 4thletter has done some amazing blogging about comics characters and race so I'll let him cover that. I think a big problem with this comic, by reviewing just the first trade, is that it has some good ideas but they never really congeal together well. There is an evil military contractor (topical then with the Blackwater controversy), Rhodes is more machine than man and it has had an impact on his humanity, there is a high-tech cyber-virus--all good ideas, but they don't get really explored that much resulting in a comic where Rhodes is kind of like the Punisher with bigger guns and not much else going for him. Greg Pak has some solid concepts, but just doesn't take it many places. I enjoyed his work on the Incredible Hercules but maybe putting him on a book that's all dark and serious wasn't the best idea. Fun stuff with Ares, the God of War, though. 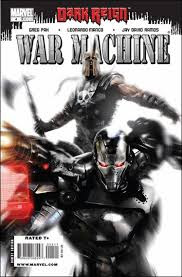 I've read a bit of the 2nd trade already and think I'll be posting a review of it here along with an older war machine trade. Also, I'll go more in-depth about the issue of race in comics, so that should be fun. In closing about this trade, the art is solid, the writing is okay, but things get more interesting in the 2nd volume, and the way that trade can be compared to an older series is intriguing as well.
2.5 out of 5 stars.
War Machine - Volume 1: Iron Heart (War Machine (Marvel))

if you would like to buy it on Amazon. I'd only do it so you know what's going on in the better Volume 2.
Posted by David Charles Bitterbaum at 12:00 AM