Possibly my favorite anthology of the year: Strange Tales II 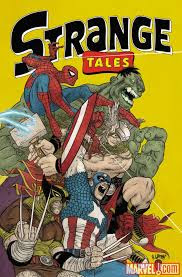 Strange Tales #1-3
Take a bunch of independent comics and art-comics writers and artists, give them free reign to do whatever they want with Marvel characters, and what do you get? The Strange Tales mini-series and its even better sequel, Strange Tales II!

I'm not as knowledgeable on the independent comics scene as mainstream, but I did recognize a fair share of creators, and they were all good ones. The Hernandez Brothers, David Heatley, Kate Beaton, Jeff Lemire to name a few--and of course everyone has gone on and on about the amazing contribution by Rafael Grampa in issue 1. I did love that story, and I'll be pickled in the art isn't good. Observe:
The art throughout the whole series is great though, and the stories that are told are pretty darn good too. A lot of the tales lean toward the humorous side, but there are serious bits, and I found I enjoyed those even more. This whole thing was good, but what was so great it sticks out in my mind? Well, the aforementioned Jeff Lemire turns in a great Man-Thing tale, Johen Vasquez of "Johnny The Homicidal Maniac" fame gives a hilarious Wolverine story, Paul Mayberry has a great take on Spider-Man and how he must explain all those bruises he gets while crime-fighting,  and the Michael DeForge "Young People" story is delightfully twisted. My favorite story would have to be a tie between Grampa's Wolverine tale in issue one and Tim Hamilton's Machine Man story in issue 3. I love Grampa's tale too because it gets to the root of what makes a man like Wolverine tick, and it looks so pretty. I adored Machine Man so much because the art is great, and the story is just the right mix of serious with a sly sense of humor, but a dab of heartfelt emotion. Oh, and that Vasquez Wolverine tale is an easy 2nd place.
I listed just some of the stories that hit, but what about any misses? Well, anthologies are always a crapshoot and some tales did come up snake-eyes--as the gamblers say. Paul Hornschemeier's Colossus story is just dull, Tony Millionare's Thor story tries to be clever but is like that kid in class who always thinks he's hilarious while everyone else ignores him. John Vermilyer's Modok story is just gross, Benjamin Marra's USA Agent story seems to be a spoof of those classic action comics, but is so deadpan I'm not sure if he actually meant to be serious and Dash Shaw's take on spider-man was just too bizarre (then again I prefer his more down-to-earth work). Even these tales which I didn't particularly enjoy are good-looking and show off the artist's craft, so don't let my negative words turn you off of this great series.
Overall this is possibly the best anthology of the various ones I have read over the year, with others like Popgun of course being great too, but this series has an advantage that makes it appeal to me: It features Marvel characters. So, Marvel characters done in a unique and beautiful way by Indie artists I already enjoy? That's a recipe for success.
4.5 out of 5 stars.
Posted by David Charles Bitterbaum at 12:00 AM