That wasn't nearly as bad as people said: Superman: Earth One 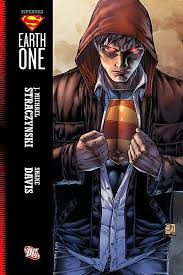 Superman: Earth One
It has seemed lately that it is fashionable to hate on J. Michael Straczynski. Even I have done a bit of hating' myself. So imagine my surprise when the somewhat poorly-reviewed "Superman: Earth One" Turned out to not be average or below-average, but a bit above-average.

Perhaps it is because I haven't read the numerous Superman back-story reboots that DC does every year or so (the only Superman story I've read in the last 10 years is "All-Star Superman"...and I flipped through "Red Son"), or because I went into it expecting it to be terrible, but this wasn't bad at all. In fact, it was kind of good. Shane Davis does a solid job on art:
Also, Straczynski turns in a solid tale. The thing is, we all know Clark Kent is going to choose to be Superman, and end up working at the Daily Planet, so all this story about him debating whether or not he wants to do so is a bit of pointless filler. The story doesn't really pick up until the alien invasion where we get the twist this out-of-regular-continuity story can do. Avert your gaze if you don't want to know, but it turns out in this universe Krypton was destroyed by an evil alien race who were hired by another mysterious race to destroy all Kryptonians (is that a word). So, Clark isn't supposed to just be a hero, but also get revenge for his people. An interesting little wrinkle in the Superman mythos.

My favorite scene in the book is arguably the most self-aware, where Clark comments on how he doesn't understand why the bad-guy always monologues his plans, that made me smile and showed some that old Straczynski wit I missed from "Supreme Power". So, despite the less-than-glowing reviews I actually liked this and will definetely be checking the next book in this series.
3.5 out of 5 stars.
Buy Superman: Earth One

from Amazon or your local comic shop if you trust my judgment.
Posted by David Charles Bitterbaum at 12:00 AM