Best Individual Issue of a comic this year: Batman and Robin #13

Best Individual Issue: ﻿Batman and Robin #13
It came out in the fall and with the combination of Frazer Irving's artwork being at the top of its game, and Grant Morrison starting to bring all of his ideas and story-lines from the preceding 12 issues together...well, it was something beautiful.
It had been revealed in the previous issue that the man who had been helping Batman out--Oberton Sexton--was in fact the joker all along. Also, he had been the very serial killer it seemed Sexton was helping to track down. All of this was being revealed in a flashback however, because in the present time our beloved Batman (currently Dick Grayson) was getting shot in the back of the head:

However, in the aforementioned past Grant Morrison was bringing everything together beautifully:

Yes, this was a great comic. It also had a nice heart-to-heart between Batman and the Commissioner, an awesome car crash, more sci-fi stuff about an addiction that spreads through a cold virus, and this happens: 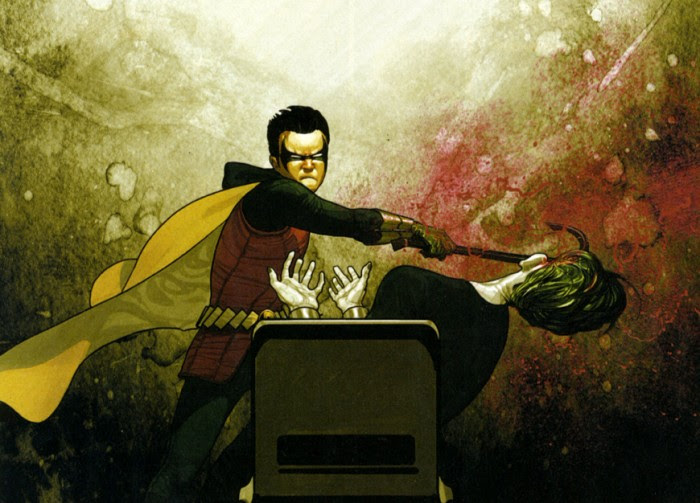 I myself am not familiar with the infamous issue where the Joker beats one of the Robins (at the time the much-hated Jason Todd) with a crowbar and then leaves him in an exploding building where he dies--but I do know of that issue, so this is loaded with irony. Plus, it shows how cool Damian can be when he isn't acting like a total brat. This issue also features more of the mysterious Dr. Hurt who has been plaguing our Bat-family of characters for some time now, and did I mention just how creepy and good Frazier Irving is with the art? 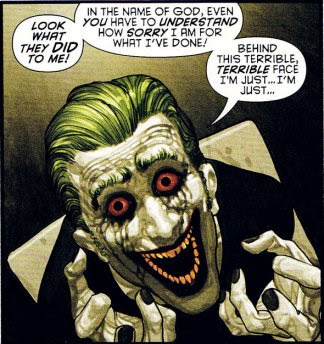 Yeah, the entire 16 issues that made up Morrison's run on Batman and Robin was incredible (excluding that mediocre 3 issues with Phillip Tan on the art), but issue 13 was just amazing. Hence, it is my issue of the year.
5 out of 5 stars.
Posted by David Charles Bitterbaum at 10:00 AM