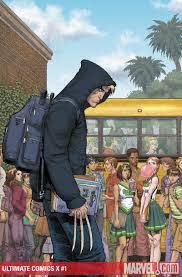 Jeph Loeb had just finished the terrible Ultimatium event where a whole boat-load of Ultimate Universe characters were killed off in the most gruesome ways possible (The Wasp was eaten, Doctor Strange literally was squeezed to death, Cyclops got shot in the face, and more), so when Ultimate X was announced people were understandably skeptical. Also, it was technically titled "Ultimate Comics X" but that just sounds lame, so it had that against it too. Then to everyone's surprise it was good.

Yes, Ultimate X had an annoying tendency to have a character who played a minimal role in the story narrating an issue, but other than that, it had drama, it had humor, it had an interesting plot with the whole "being a mutant is illegal" thing going on. It actually was a decent comic. True, it was annoying it only came out every 2 months, but that was the price to pay for such nice art from Art Adams.

Some new characters were introduced, a few old ones popped up, the art was so pretty, it was a genuinely good time. Then something happened...August rolled around and issue four never came out. It was a bit delayed, alright. Then September, October, November, and into now December, and still nothing. Supposedly we could see it finally coming out eventually, but I'm not sure whether I really believe it or not. I won't until I hold it in my hands.
Posted by David Charles Bitterbaum at 12:00 AM