Jessica Jones of Alias fame to get own Television Series. I am quite happy. 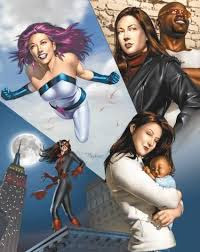 I don't know if you've heard the news, but Jessica Jones of one of my favorite comics, "Alias" and now a part of New Avengers as Luke Cage's wife and mother and of their child, will have a version of her character getting her own television show! Titled "AKA Jessica Jones" I really hope this doesn't suck, and with orignial writer Brian Michael Bendis as an adviser I think things will be okay. Too bad they can't go with the title "Alias" as people will probably confuse it with that Jennifer Garner show I never watched. Anyways, I'll be watching this show for sure. I just hope they use other actual Marvel characters who aren't big enough to be in the movies, but well-known enough I'll go, "Hey, that's ____!" Also, if Luke Cage is in this show I will be giddy as a schoolgirl.
Posted by David Charles Bitterbaum at 10:34 PM