That was a waste of time--Bruce Wayne: The Road Home. 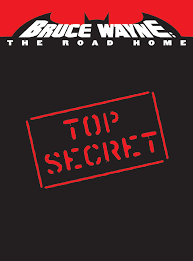 Bruce Wayne The Road Home: Batman and Robin, Red Robin, Outsiders, Commisioner Gordon, and Ras al Gul.
Grant Morrison's The Return of Bruce Wayne had been suffering delays so D.C. decided to release a series of seeming one-shots detailing how various people who had worked with Batman...well, the solicits didn't exactly say what these comics were about. Why were they a waste of time though? Well, remember how Marvel comics made a big deal of Captain America coming back but his main series got delayed so we ended up seeing him appearing in a bunch of other comics? Yeah, think on that scale.
These had been solicited as one-shots so imagine my surprise when it turned out to actually be more of mini-series. That's right, you needed to read the issues in a particular order to understand the story. I didn't know this at the time it was solicited as DC saw fit not to tell anyone this little fact. I ended up only ordering the issues that interested me and was so miffed I refused to buy the other ones. What was the story? Something about Vicki Vale knowing who Bruce Wayne is/was and how that tied in with Bruce checking up on everyone for some reasons disguised as someone known as "The Insider".

It is a bit odd to have Bruce running around because when these comics came out he was still "lost...in...time!" It doesn't help all the issues had different artists and writers either, so while some were decently written (Red Robin) or good looking (Commissioner Gordon), others just were miserable (Outsiders). Does it really matter though? This was all just a big pile of filler that illustrated how little respect mainstream comics seem to have for their readers sometimes. I can picture some bald guy in the DC offices, high in some skyscraper, petting a white cat while his terrfied peons come to him with the news,
"Sir, Grant Morrison and the various artists for his mini-series are taking longer than expected," they say. "Blast! Release a fill-in," he bellows.
"A fill-in issue, my lord?" they respond, their voices quivering in terror.
"No, you fools! A fill-in mini-series, that shall bring us more money from those stupid fan-boys who buy every comic and then complain about them but keep on buying."
Then one lowly subject as the nerve to speak up, "Isn't that just furthering the stereotype of mainstream super-hero comics having overly-complex continuities, with obsessive fans who buy any crap that's shoveled out to them?"
BAM!
And the one person with the nerve to speak up is shot right through the head.
1.5 stars out of 5.
Posted by David Charles Bitterbaum at 5:40 PM