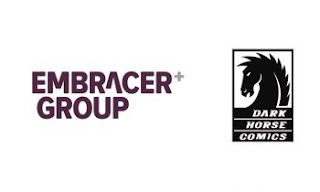 At the start of the month, I discussed the rumors swirling around that Dark Horse (their comics divisions as well as their entertainment branch and comic selling website, Things From Another World) wanted to be sold and acquired by another company. Well, someone indeed wanted that sweet, sweet intellectual property--a video-game company known as Embracer. It sounds like Embracer is going to be relatively hands-off when it comes to how Dark Horse is run. The founder of the company, Mike Richardson, will remain in his head position. Richardson used to own it Dark Horse outright but now is simply selling his remaining 20% of shares--Embracer bought the other 80% from a company described as, “a seller based in Hong Kong and China," AKA Vanguard Visionary Associates.

It sounds like nobody is going to be laid-off, so that's good. I don't think any divisions will be merged, or any big changes of that nature. Little will be altered beyond Embracer will now own all the properties created outright (that aren't creator-owned, at least). Embracer can make games with them, license them for movies, or whatever else suits their fancy. I'm unable to find any exact numbers on what Dark Horse sold for, but I'd imagine it was a nice chunk of change.