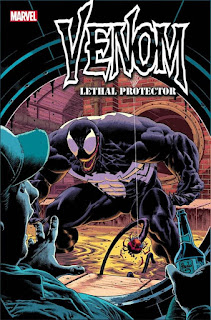 Lately, Marvel has been doing this thing where they tell generally in-continuity stories about their heroes at earlier points in time. They've done it with the, "Symbiote Spider-Man," minis, the, "X-Men Legends," ongoing series, and so forth. Now, one of the co-creators of Venom, David Michelinie (Todd McFarlane being the other main creator, but he's not involved this time), is returning to Marvel to write a mini-series about Venom's early days causing a ruckus. It has a familiar title as it is the same as the first Venom solo book--"Lethal Protector."

I'm intrigued about this series but have to admit it is a little confusing that Marvel wants to use, "Lethal Protector," again as the title, making this basically have to be noted as, "Lethal Protector (Volume 2)," even though it ostensibly takes place before even the first, "Lethal Protector," mini-series as its a prequel (before Venom even started sporting his infamous big tongue) and oh dear my brain hurts now. Anyways, as long as we don't think about the naming logistics too hard this should be fun as Michelinie revisits his co-creation with increasingly-popular artist Ivan Fiorelli as the illustrator (Paulo Siqueira is doing the cover). I'll be checking this out in late March when it hits the stands.