The First Two Issues of, "Newburn," Are Really Good 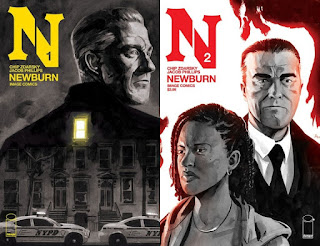 I guess I'm on a Chip Zdarsky kick as I recently reviewed his, "Devil's Reign," comic. I suppose Chip Zdarsky being a skilled writer of comics makes me like his work a lot. Also, Jacob Phillips is a great comic artist whose work on, "That Texas Blood," has been phenomenal. Now, they have begun working together on the comic, "Newburn." Published by Image, it is just a twisty little read. It focuses on a private detective named Easton Newburn.

Newburn used to be a cop and now he works for all the different mafias to solve their problems without involving the police. At one point he's described as being like a U.N. inspector in a battlefield of crime families. With his past police connections they respect him, nobody criminal touches him thanks to his unique helpful skills and neutrality, he's a bit of a scary legend. He's also cold and calculating and by issue #2 has taken on a new employee of sorts named Emily because she observes he needs someone who can talk to people as that's his own skill that's lacking. The first issue is basically designed to show how smart Newburn is and the second introduces an interesting, "The Odd Couple,"-styled dynamic with Newburn and Emily. Both issues are great between Zdarsky's skill with dialogue and Phillips's ability to set a scene--pages drip with a dreary and ominous tone. 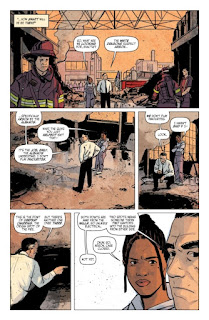 I read somewhere the main idea with, "Newburn," is that a mystery is solved each issue while an overall story starts to form that examines the strange man that is Easton Newburn. That is indeed what has occurred in these two issues and I'm interested in seeing the further cases Newburn and Emily will be tackling--or if Emily will even keep working for Newburn as more of his potentially awful secrets that are hinted at emerge. A great read.