A Review of, "Devil's Reign," From Someone Way Behind on, "Daredevil," Comics 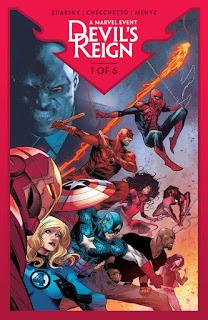 Chip Zdarsky did a phenomenal job writing the current, "Daredevil," series...or so I've been told. I have to add that caveat as I'm admittedly extremely behind on reading that series which just ended so that it could lead into, "Devil's Reign." I read the first issue of Zdarksy's run on, "Daredevil," and plan to read all the other issues, I just have so much stuff I'm already behind on reading you can add it to the list of stuff I need to catch up on (I haven't even read Soule's run on the character and I like his stuff too). With that said, the idea of, "Devil's Reign," sounded neat with (now mayor of New York City) Wilson Fisk basically allowing superhumans to live in NYC but outlawing them from using their powers unless officially employed by the city. Plus, I saw that Moon Knight appeared in the first issue and the events of, "Devil's Reign," would impact his current (and very great) series. Hence, I read this new, "Devil's Reign," comic despite being in the dark about a lot of what is going on with Daredevil currently. I still quite enjoyed it.

I'll be honest, a lot of, "Devil's Reign," has characters mentioning things that apparently have happened (and some have little notes about what issues we need to read to understand the references), but I was totally in the dark about what folks were talking about. Apparently, Purple Man had kids who made everyone forget that Matt Murdock is Daredevil. Plus, Daredevil was in prison for murder but was allowed to stay masked and got out somehow recently. Also, Wilson Fisk's son (who is alive?) is currently the Kingpin of NYC and is working with Murdock's brother--yes, Matt Murdock has a brother now that looks just like him (when he got a brother I do not know but I'll roll with it). Fisk married a currently level-headed Typhoid Mary at some point too, so okay? There is a lot here I have no foreknowledge of because even though I write a blog that often covers comics I can't stay up to date on every single publication. Even with my ignorance regarding Daredevil, I found, "Devil's Reign," to be a good time. 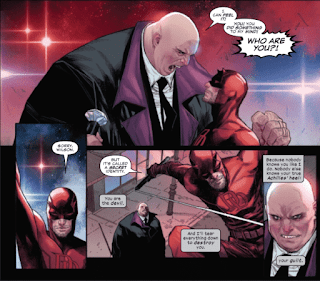 "Devil's Reign," is a good comic because Chip Zdarksy is a great writer and Marco Checchetto is a superb illustrator. For example, during a scene where Fisk's Government-sanctioned thugs attack the Fantastic Four, you can feel the absolute heft of The Thing as he fights them off and gets the Fantastic Four's kids to safety. Anytime we witness Mayor Fisk in a quiet scene you can see the intensity and seething hatred in his eyes for superheroes--Daredevil especially. It's gorgeous stuff as Zdarksy and Checchetto give us a quality first issue to this event.

If you've been reading, "Daredevil," comics you almost obviously are going to read, "Devil's Reign," but even if you haven't checked out a Daredevil-related book as of late you should pick-up, "Devil's Reign," if you simply want a quality event. I followed it quite well and just maybe need someone to explain to me why Elektra is dressed like a version of Daredevil too and then I think I'll be set. You know what, it's cool, I'll Google it.