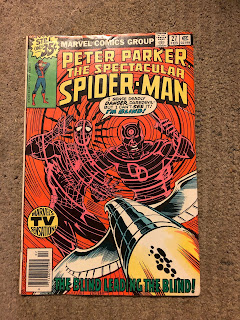 I have written before about my very complicated relationship with the work of Frank Miller. Regardless of people's thoughts on him or his work within the past decade, almost everyone can agree Miller's stuff in the 1980's and 1990's was often pretty great. He is of course especially known for his time drawing and then also writing the character of Daredevil for his series, "Daredevil." One interesting little footnote in the history of Miller and his work on the character is he actually first illustrated Matthew Murdock's super-heroic identity for a, "Spider-Man," comic. Yes, an interesting bit of trivia for sure. 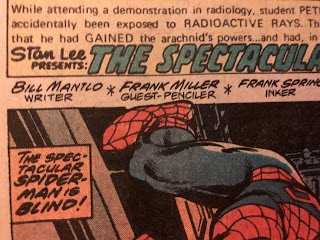 I recently had the pleasure of buying a bunch of comics from a friend of mine named Brittany. She had an assortment of books and I bought the lot as a good chunk of it interested me. There were some books I was not as familiar with however, so I looked them up, and in doing so discovered that, "Peter Parker: The Spectacular Spider-Man," #27 featured the first occurrence of Frank Miller drawing Daredevil (for publication, at least, I don't know how often he may have doodled the character on napkins before that). This specific book isn't especially rare or valuable as Miller's later work on the character would be the sought-after stuff, but it still is kind of cool to see his name there as a, "guest-penciler," which is a fancy-way of saying, "Fill-in artist," for when a book's regular artist gets delayed and it needs art fast. 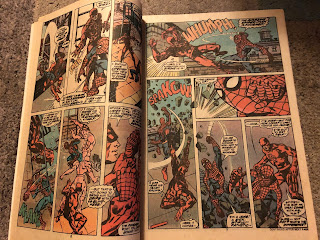 The plot of the issue isn't anything that wild, with it basically being about Spider-Man and Daredevil teaming-up after at first arguing and then realizing they need each other's help despite their mutual distrust--a standard story-template without a doubt. Still, it is cool to witness Frank Miller way back in the past with this book featuring a publishing date of  February of 1979 first getting his feel of drawing the famous protector of Hell's Kitchen that later would go on to define much of Miller's career. It is a fun little fact about Frank Miller and Daredevil and I thank Brittany for selling me this along with a bunch of other great reads. I would encourage you to visit the page of the nonprofit she manages, STL Animal Rescue Connection.
Posted by David Charles Bitterbaum at 10:19 AM