"Meet the Skrulls," Has Been a Weird (and Good) Little Comic 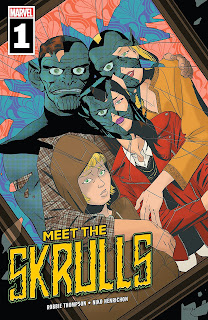 There is currently a mini-series of five issues that Marvel has been putting-out titled, "Meet the Skrulls." It doesn't tie into any big event going on and features basically no, "Known," Marvel heroes outside of a short Tony Stark/Iron Man appearance here-and-there as the comic takes place at one of his industry-labs. It also has an art-style that is a lot more abstract and different from most Marvel stuff. Written by Robbie Thompson and featuring the aforementioned artwork of Niko Henrichon, "Meet the Skrulls," follows a seemingly normal family known as The Warners who actually are all deep-cover Skrulls, or as one friend of mine put it, "It's kind of like that show, 'The Americans,' but with space-aliens." It is a weird little comic, and very, very good.

While, "Meet the Skrulls," takes place in big hero-filled Marvel Universe it has a very grounded feel (for a comic about aliens posing as humans, at least). The Warners are in a fact an actual family, and they are doing a mission to stop something Earth has been developing known as, "Project Blossom," which will allow humans to detect Skrulls with ease--something it seems Earth started working on after the, "Secret Invasion," some years previous (it very loosely spins out of the event from awhile ago, but still doesn't really tie into anything as I wrote earlier). The Warners are dealing with a lot of stress from a mysterious man going around killing Skrulls, their mission having assorted complications, and one of the daughters seeming more interested in trying to actually live as a human than working for the Skrull empire. It has one issue left and I'm incredibly curious to see what happens and if there will be a follow-up (or if the characters appear in other series somehow). I am eager to see how everything reads once it finishes!
Posted by David Charles Bitterbaum at 6:05 PM