An Odd Rumor About Tom King and His Work on, "Batman," is Spreading

Update 5/23/19, 9:45 PM
It is official that King is off, "Batman," but will be working on other DC properties still, one of which may allow him to finish his big Batman tale. The first outlet to report this, Bleeding Cool, is quite pleased with itself, admittedly reasonably so.

Original Article
Assorted websites such as Bleeding Cool and Comics Beat have been talking about an apparent rumor that popular comic-writer Tom King is no longer going to be working on the, "Batman," comic as of issue #85. This is strange as outside of a few issues that tied-in to other events King has written the comic since its most recent relaunch (when, "Rebirth," started) and has indicated he has a 100+ issue master-plan that everything leads up to (and changes Batman forever...or until the next reboot).

Some people have said this relates to sales of, "Batman," dropping to a level that displeases DC/Warner Brothers, others claim it has something to do with King's idea to, "Change," Batman being one the company now is less in favor of having occur. Also, there are people who have stated this is all just a big silly rumor and nothing is changing, or at most maybe King is going to get his own separate series/mini-series to wrap things up while the main, "Batman," book goes in a new direction for one reason or another (there are always events to tie-in with.) 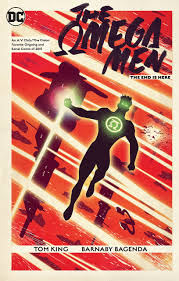 I don't know what is happening or going to happen, and I haven't really read much of King's run on, "Batman," outside of some earlier issues and that decent, "The Button," cross-over between his book and, "The Flash," that set-up elements of the eternally-delayed, "Doomsday Clock." That said, I kind of chuckle at how this vaguely reminds me of years ago when King was doing, "Omega Men," for DC and while he had made it clear the plan was for it to be 12 issues it was at first cancelled and shortened to seven issues before enough outcry took place for DC to let it finish at its full dozen of issues (and go on to be highly-regarded as a great read). This is funny as while comic-book fans can sometimes be really mean to creators (especially with some awful so-called movements nowadays like Comicsgate) it is the fans who seem to have helped Tom King previously when his work was in danger of being affected by the higher-ups at DC/WB.

One can only wonder how much truth there is to this rumor of King being kicked-off/replaced on, "Batman," and if there will be enough outcry from people invested in the 80+ issues King has written to reverse any possible decisions DC has made--if this rumor has much truth to it, which we do not know (so yes, this whole article could be a moot point, so sue me). It probably won't be too long before this all is proven true, revealed to be false, or turns out to be a mixture of accurate scuttlebutt and imagined nonsense. In the meantime I wish Tom King the best as he is a very nice guy and has written some great stuff (and some things I've hated, but that's normal).
Posted by David Charles Bitterbaum at 3:13 PM