"Drawing Blood," Is An Extremely Weird & Meta Comic I Quite Liked 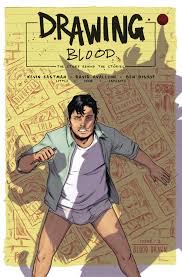 Kevin Eastman was one of the co-creators of the, "Teenage Mutant Ninja Turtles," in the 1980's with Peter Laird. During the 1990's it brought him lots of fame, money, and complicated his life immensely. He has collaborated with some other talented creators for his latest book, "Drawing Blood," which follows a man named Shane Bookman. Bookman was the co-creator of the, "Radically Rearranged Ronin Ragdolls," and in the 1990's and it made him rich, but then he sold the rights and now is ery depressed and struggling to come-up with something new to create whilst owing some bad people a lot of money. Clearly there is a whole lot of meta-stuff going on here, with the comic carrying degrees of being an autobiography but also a chunk of fictional elements (I hope Eastman doesn't owe a ton of money to violent bookies).

Co-created with David Avallone the comic has an interesting mix of art. Eastman draws flashbacks of Bookman's life when he came-up with the mutant cats who fight crime, Ben Bishop draws the present day, and Troy Little illustrates hallucinations involving the Ragdolls as well as a fictional one-shot that was "Created," by Bookman and portrays the hit characters. Again, it is all very meta. Funded via a Kickstarter campaign, you don't have to know much of anything about the, "Teenage Mutant Ninja Turtles," but simply being aware that Eastman made them and now is writing the twisted adventures of a similar fictional creator adds a fun element of wondering how much is non-fiction and how much is made-up. Has Eastman personally struggled with fame, suffered from writer's block creating something new, or had regrets about selling his rights to his original creations? Perhaps, we don't know for sure though and it is still quite entertaining to watch Shane Bookman dealing with all this. 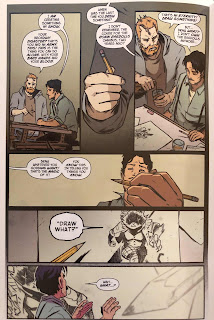 "Drawing Blood," is very weird and extremely meta. It also is well-drawn and fantastically entertaining. Even if there weren't the cool vaguely autobiographical elements to the story thanks to Eastman it still would be a hoot, and I am excited for the upcoming issues that will delve further into Shane Bookman's issues and just how much trouble he may be finding himself in as the series progresses.
5 out of 5 stars.
Posted by David Charles Bitterbaum at 7:17 PM