"World of Warcraft Classic," Is Making People Mad By Giving Them What They Want 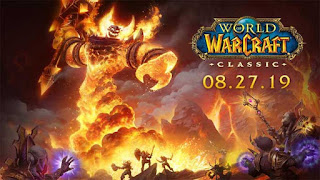 I used to play, "World of Warcraft," a lot in the old days when the level-cap was 60 and getting there took lots and lots of time. I enjoyed it but quit way back in 2011 around when the, "Cataclysm," expansion came out and I found myself less-and-less engaged with the series. I have some great memories of WOW, but know full-well a lot of my fond recollections are occurring with rose-tinted glasses. old-school WOW was as lot harder and a lot less fun than people probably believe. Now, after a lot of fan demand and unofficial versions being shut-down, there is going to be a 100% Blizzard-approved (and run) version called, "World of Warcraft Classic," and fans beta-testing it are convinced features that make the game harder and less fun are bugs instead of those classic features. This is hilarious.

Often when think back to the things we enjoyed doing in the past we forget or outright purposely ignore the stuff that wasn't as pleasurable. Players are outraged that quest objectives aren't showing on the map (a later feature) or that creatures they need to kill are respawning so slowly after other players kill them (the game used to involve a lot of waiting around for a stuff to reappear), and maybe its proof that there really never were, "Good old days," in WOW, it just was less of a mess than other online games and managed to rise to the top through its constant updates and tweaks--the very ones players claim they wished were gone for a more, "Classic," occurrence. The moral of the story here is that I hope everyone playing the newest version of, "World of Warcraft," will enjoy having a throw-back version and it will make them value just how far the game has come as well. I still have zero intention of going back to it in a modern or classic format, however. I ain't got time to grind a bunch of Murloc mobs these days.
Posted by David Charles Bitterbaum at 8:55 PM