That Upcoming, "The Vision," Comic is Suddenly Cancelled and I'm Quite Perturbed 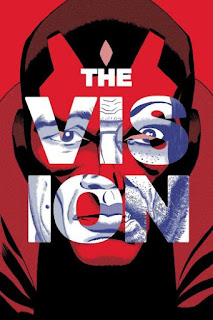 Chelsea Cain is a writer who was behind one of my favorite comics that was sadly cancelled back in 2016, "Mockingbird." It had been announced she would be writing a new comic with Marc Mohan focused on The Vision and his daughter, Viv. It was announced as a sequel of sorts to the stellar Tom King-written, "The Vision," with the exact same name as that series--e.g. just the titular character's name. It was to have some stellar-looking art by Aud Koch, and the original colorist for the first series, Jordie Bellaire, would be back too. I was very, very excited. Then, I saw on of all possible places, Bleedingcool, how Cain tweeted the book was suddenly axed. Four of the six issues were already done and turned-in to Marvel, and the company just decided it had other plans for The Vision as well as Viv and there went, "The Vision," comic. Other news outlets have reported on this now, expressing just as much confusion and sadness as everyone else.

I'm not pleased, in fact I'm quite perturbed. Marvel hired this talented bunch of people, let them get 2/3 done with the series, and then decided, "Nah, we have other plans for these characters," and shoved the completed issues in a metaphorical drawer to possibly never be seen again (its a metaphorical drawer as I imagine much of the stuff is digital, as a lot of comic-work is these days). I mean, everyone got paid so Marvel isn't necessarily screwing-over anyone besides us readers who were excited to read the series, but come on ya'all, maybe just let the team finish the series and release it as some kind of extended, "What-if," book should you really want to take the characters in a different direction? That way we can at least all read the damn thing! Oh well, at least I can look forward to Cain's upcoming Image series, "Man-Eaters," which actually has the art done by her, "Mockingbird," collaborator, Kate Niemczyk.
Posted by David Charles Bitterbaum at 2:10 PM