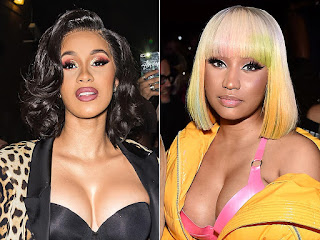 I have a question: Why can't we have two super-successful women in rap without some kind of feud or fight erupting? Male rappers of course will at times have, "Beef," and it can end very tragically or seem really, really stupid. Often male rappers will get along just fine however, being friends and collaborating a bunch. Yet, it seems like there can only ever be one big-time female rapper and if any others emerge people act like we need a fight to the death (of a career at least) to determine who is, "Better." I mean, for so long we had the reign of Lil' Kim as the big-name, "Bad Bitch," before Nicki Minaj came along and stole that crown. Then, Cardi B--who had been underground and struggling for a long time--was able to break-out onto the mainstream scene, and ever since then there has been an effort to construe her and Nicki as foes. Well, I guess folk got what they wanted.

Apparently at a big New York City Fashion Event there was allegedly a comment made by Nicki Minaj to Cardi B about how good or bad of a mother Cardi is. This resulted in a shoe apparently being thrown and Cardi rushing at Nicki in the hopes of--as the kids today say--"Fucking her up." Both women had their security intervene however and Cardi B was rushed-out by her team. Reading the whole sad saga about how we got here is whatever the opposite of, "Fun," would be, and I'm just depressed about all this. The whole thing seems to be a mixture of other folk trying to turn these women against each other, the ladies themselves feeling their success is threatened by another talent, and of course a good dose of everyone's ego making them eager to say, "Come at me," to anyone who questions their skill/success.
I'm not really a fan of either woman, I always say Lil' Kim did so much of this first and did it better. That said, I don't like any songs by Nicki and find when I've read articles about her or seen shows/interviews she's done she seems relatively unpleasant while meanwhile Cardi B has at least one song I enjoy and appears to be one of the most energetic, funny, and peppy people around. That said, it shouldn't matter if I like one of these women more than the other, they should both be able to have success and enjoy stardom without having to feud and fight. They are mad at each other though, so expect plenty of press about that and in the ultimate twist this will probably only help both of them to get more sales/streams, promotional deals, and the like.
Posted by David Charles Bitterbaum at 9:38 AM