The First Teaser Image for the Standalone "Joker," Movie with Joaquin Phoenix is Out. I Have Opinions 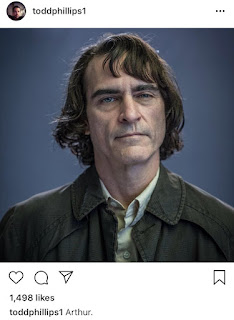 Alright, so DC's cinematic Universe is currently a mess right now--"Wonder Woman" aside. DC had previously said they would have movies starring characters that didn't necessarily relate to the main movie-verse, but were instead standalone flicks. One of those was a supposed origin story for the Joker. The main gimmick of the Joker of course is that he doesn't necessarily have an origin story. He has many origins. Maybe he was a struggling stand-up comedian who just had one really bad day that drove him insane. Perhaps he was a gangster who used a, "Red Hood," identity until he was disfigured and became the Joker. He could be a man whose wife was murdered by mobsters. Heck, maybe his name was even, "Jack Napier." We don't know because he is as unreliable a narrator as any, with whatever yarn he turns to explain his background being just as likely a falsehood as true--something Heath Ledger used to clever effect with his, "Do you want to know how I got these scars?" monologues in, "The Dark Knight." This all makes me hesitant to see a, "Joker," film or whatever title it gets. Then this picture of Joaquin Phoenix as Arthur Fleck AKA a pre-Joker version of the Joker comes out on the Instagram of the film's director , Todd Phillips, and I have both reservations and maybe this weird feeling that I believe is a glimmer of hope?

Just look at that picture up there. Phoenix is giving us the look of someone who seems relatively calm, but clearly has some rage bubbling away deep inside. With a quick glance the image is mostly unassuming, but look at the eyes and mouth. There is something in there, something dark and twisted just waiting to get out, and Phoenix is a gifted enough actor he just may be able to pull this off. Still, there is the problem of how the Joker isn't supposed to have just one origin. Perhaps the movie can make this work and we'll see a story that is purposely littered with contradictions, logical missteps, and the like, hinting that whatever tale we're seeing maybe is being told by someone who can't be trusted--the movie could even open with Phoenix-as-Joker saying he's going to tell us his story, and then be almost like an anthology with a few short vignettes all differing in how Arthur Fleck becomes the Joker, but that seems almost too easy a way to do the movie.

"Joker," has a lot stacked against it, but also by being fee of the Cinematic Universe baggage that allows Todd Phillips to go in all kinds of zany and weird directions that are perfectly suited for an actor like Phoenix, who will readily admit to being zany and weird himself. This movie could be an absolute abomination or turn-out to be amazing. I'm ready for it to suck, but still have that tiny bit of hope in me that not even the greater number of crappy-than-good DC films can snuff-out. I am wondering who will be playing Batman if the character gets an appearance though.
Posted by David Charles Bitterbaum at 12:44 PM