Breaking The Story: Sex-Work Thrives on Letgo of All Places

Welcome to my new occasional segment I've titled, "Breaking the Story." It is where I make a post discussing a subject I have noticed/become aware of but found little-to-no coverage of in the news/in social media, etc. Today, we cover how sex-work seems to be thriving on the app, "Letgo."

I am surprised I have not seen more news about something, so I wanted to discuss it. Namely, there is a ton of sex-work going on via, "Letgo." I first noticed this when I was traveling with my wife to my cousin's wedding some weeks ago because whenever we stopped in cities I would check, "Letgo," for fun to see if anybody was selling comics, Funko Pops, etc. nearby. I didn't plan to buy any, but I enjoy seeing what's popular in various places. It was at this time I noticed on Letgo how with its recent-ish addition of, "Services," that I saw a listing for, "Cleaning," that pictured a woman posing somewhat suggestively--e.g. fully clothed but making a duck-face and with a low-cut top that prominently featured her, "Mammary glands," as they are medically known. I thought it kind of funny. Then it made me think, "There might be a story here." 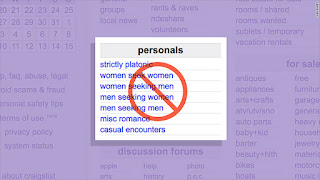 Let's rewind to earlier this year when Craigslist got rid of its longtime, "Personals" feature that had allowed many adults to meet each other for adult encounters (AKA genital-stuff). It also was often used to facilitate sex-work. This led to how a lot of sex-trafficking was happening through the website, which is of course terrible. However, there were people who were breaking the law engaging in sex-work, but of their own volition--e.g. a person selling their company on their own. Now, the idea of sex-work is rife with lots of moral, political, and religious objections, with it only legalized in a very few areas of the United States (like a chunk of Nevada). Still, despite it being illegal many people worked to make a living through being an escort/doing sex-work. Once Craigslist shut that down, it affected a good deal of these people. Where would they go? Various websites and apps, with Letgo apparently being one.

Upon my realizing something interesting was happening here, I made new account with Letgo besides my actual one to do some research and started changing my location to cities and areas all over the United States where I found plenty of women (I only ever found women, no men advertising the same with suggestive poses) offering services ranging from, "Cleaning," to, "Data Entry," to other random tasks, but instead of the pictures featuring them actually doing these things, it was just images of them in makeup and slightly-revealing clothing. Nothing raunchy enough to immediately make you think anything was up...but something clearly was up. "Perhaps this is all a big misunderstanding," I thought, "It's possible they just posted a random selfie and truly want to clean stuff." Then I put-on my techie-hat and proceeded to look various people up through other social media and websites who were on Letgo.
Some were indeed cleaners and maybe just wanted to look nice for their pic, some even had a website. One woman who advertised how she could do, "Roof Maintenance" of all things actually did have a lot of pics besides her, "Selfie," featuring her in full safety-gear swinging a sledgehammer in assorted attics. However, then I found people who advertised cleaning but also had Facebook profiles or websites that showed they engaged in adult modeling, stripping, or massage-services that didn't seem like the officially licensed kind. Now, I imagine someone who strips during the night might very well have a cleaning service during the day, but if that's the case it is interesting they use an image that shows off their bodily, "Assets."

I have not shown any pictures of these listings or said names of the women in various locations as I don't want to draw unwanted attention or harassment to towards them. I have no moral objection to if consenting adults want to have sex, are safe, and it is their own business if they want provide funds for it. I do just worry about the safety of these people forced to operate under synonyms and using coded-language on apps so as to avoid getting arrested. These women have no clue what they are in store for when they go to, "Clean," someone's house and that can put them in great danger. It's no coincidence that the way the U.S. criminalizes sex-work makes any attacked sex-workers afraid to report their assault. In countries that have legalized individuals performing sex-work (but still of course work to prevent trafficking or abuse) the statistics of sex-workers being assaulted or killed have dropped dramatically. Meanwhile, outside of some select regions in the United States people have to sell, "Cleaning services," if they want to engage in sex-work.
Considering how much the media loves saucy stories about sex and sex-work I am genuinely shocked to find basically nobody has written about this. I mean, "App created to unload junk also used for selling sex," is an attention-grabbing headline for sure. Now, Letgo obviously wouldn't allow anyone to engage in sex-work on the app, and all of these women can claim they truly were just offering cleaning-services, light yard-work, and so forth if ever confronted by Letgo about it. Still, for those who are engaging in sex-work willingly with nobody forcing them to do so I offer no judgement, just concern for safety. To summarize all this though, who would've thought an app we use to try and find or sell used televisions or such for cheap would also be full of sex-workers?
Posted by David Charles Bitterbaum at 8:15 AM