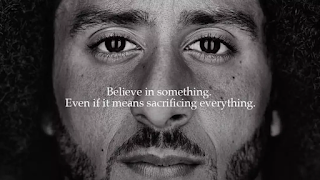 Colin Kaepernick played football, he was a back-up Quarterback for the 49ers. He decided to protest police brutality during the National Anthem by taking a knee, after speaking with Veterans who said that was better than just sitting. He did not draw attention to this act, he just did it. Eventually someone noticed, asked him what he was doing, and he explained it. Then shit went crazy, he ended-up basically blacklisted from football for taking a stand, and our President turned the idea of protest in the NFL into a big thing for him to fire-up supporters about. Kaepernick repeatedly said it was not meant to disrespect troops, the country, or anything beyond his protesting police brutality towards African-Americans. He was using his freedom of speech to make a stand as many other famous athletes had done. Still, shit went crazy, and the NFL has been dealing with the ramifications since.

Nike has hired Colin Kaepernick to be a spokesman/face of an advertising campaign. This has enraged people who dislike that he had an opinion and expressed it. Now a bunch of conservatives are expressing their anger by ripping-up or burning the expensive Nike gear they own as a form of protest, I guess? I don't know how destroying something you already own really hurts Nike, but okay. Let's be honest here though, Nike knows full well what it is doing. It crunched the numbers and found hiring Kaepernick would get them more support/sales than it would anger/boycotts. A big corporation doesn't do anything solely for a moral/political reason. Nike realizes more people either support Kaepernick, or at least support his right to have done what he did, than people who are mad at him. By signing this man famous for his protest he wins because he gets money and to spread his message, and Nike wins because they get tons upon tons of press and will most likely get a ton of sales from people now eager to buy their stuff (which they undoubtedly figured to be a higher percentage than folk who will be mad).
Just as it is Kaepernick's right to protest against police brutality how he chooses, all these folk ripping-up and setting fire to their Nike apparel are fully allowed to do so as well. In the end though, for Nike this is all about money, and it cares a Hell of a lot more about the money it is set to make from this than the potential profits lost from angry folk. In the end money talks, and it's talking in a manner more in favor of protest and speaking-out for what's right than it is forcing athletes to be quiet in the face of ignorance.
Posted by David Charles Bitterbaum at 5:28 PM