First off, be warned I spoil much of the movie. That said, have you ever seen a film that has an assortment of cool little moments but the overall product just doesn't quite jell together? Yeah, that's the newest entry in Predator-related films, this one simply titled, "The Predator." It has lots of loud and dumb fun bits, but once it is done the more you try to sit-back and examine the overall plot the more it just doesn't make sense. We get cool scenes of fighting but the movie seems to rush around so much and introduce ideas that it never follows-up on that besides some good action and funny jokes we have a mess of a plot. To illustrate this I'll rattle off stuff that comes right to my mind without even much effort.

Here are some plot issues I can list without even considering it much: There is a Predator that came to Earth to help us fight the Predators, in theory, but it just kills a bunch of humans even though it brought us a gift we have revealed at the end. The U.S. Government's secret program recruits a doctor (played by Olivia Munn) to help with their program, reveals a lot to her, then wants to kill her once a captured Predator escapes for no clear reason she needs to die instead of helping track it down. Why is Sterling K. Brown's character so evil and what point does the secret, "Stargazer," program serve? How does a little kid solve the mystery of the Predator technology that no one else has--and why is his autism/being on the spectrum considered an, "Evolution," that makes a Predator want to kidnap him--is he a savant too or is his just being autistic appealing to Predators for some reason? What was the point of the whole sub-plot about Predators stealing DNA from around the galaxy to make themselves bigger and more dangerous as the movie mentions but then kinda skims right past that, saying it also is for adapting to a hot Earth once humanity wipes itself out with global warming--a point expressed with a metaphor about when Hostess went out of business and Twinkies could not be bought for a bit (yes, really)? The whole story is a mess, and hearing the last-third of the movie had to be reshot just makes me wonder how even worse it must have been. 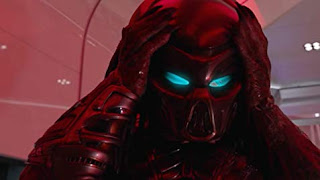 As that big chunk of writing illustrates, this movie makes little sense. I still liked it though, because the parts with fighting, jokes, and explosions were fun. I just feel like for a movie that is almost 2 hours long it really rushes through a bunch and could have greatly expanded a bunch of scenes while also cutting a whole Hell of a lot of stuff to be a ton better. This review from Vox summarizes how the haphazard editing is probably the biggest thing to blame, also mentioning how the movie has a big cloud over it with the controversy of director Shane Black hiring a friend who is a convicted sex offender for a role, without telling anyone about his offender-status. That was a stupid move, and the press from all now threatens to overshadow anything positive or negative about, "The Predator," which despite my issues with the actual plot, has a chunk of stuff to recommend.

The chemistry of the cast (besides the emotionless lead character played by Boyd Holbrook) is stellar when they are all just hanging-out making quips or debating how, "The Predator," should really be called, "The Hunter." Lots of the jokes do land and gave me a chuckle here-and-there, plus some awesome special effects and big ol' explosions are always appreciated. Still though, the last third is a slog, the ending is an utter mess that wants to set-up a sequel with its, "Predator Killer," suit, and the editing is more messy than one can believe--and the whole, "Autistic people are the next step in evolution," is just a weird concept that if anything makes autism seem more, "Weird," than how it is simply something many people have and function perfectly fine with--not a gift or a curse.

"The Predator," is a huge mess, but an enjoyable one. It truly feels like a mixture of fun vignettes that someone tried to staple together into a cohesive movie--and horribly failed at attempting. There is enough in the movie to recommend to fans of Predator flicks or folk who enjoy big & dumb action movies, but I can't help feeling this could have a been a lot better. As it is though, I liked, "The Predator," even if it clearly could have been so much more than the flimsy sum of its parts. At least it is better than, "Predators," but that's not exactly a big challenge.
3 out of 5 stars.
Posted by David Charles Bitterbaum at 9:46 AM