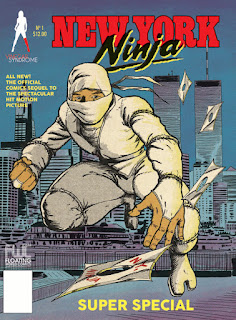 I've been a fan of Charles Forsman for some time, even having interviewed him before on the blog. I continue to follow his work so when I saw he had created a comic that served as a sequel to the surreal cult film, "New York Ninja," I was quite intrigued. Here's the thing, I never actually have seen, "New York Ninja," but I did Google a bunch of information about it after reading the comic. It has quite the odd history and you can buy a copy of it via a website I've written about being awesome before, Vinegar Syndrome. I understood the comic, "New York Ninja Super Special," just fine even though I hadn't seen the flick and it was so much fun to read!

As I read this official sequel comic to, "New York Ninja," I was reminded somewhat of another comic Forsman did, "Revenger." I loved, "Revenger," and have enjoyed its various follow-up comics. Those comics felt like you were reading a B-movie so it makes perfect sense Forsman would be so perfectly suited to tell the story of a due who is a ninja trying to hunt down his wife's killer (while also training a kid and fighting a variety of crime). This treasury edition-sized comic features Forsman's amazing artwork, and the pages practically breathe with the grime and sleaze of 1980's New York. 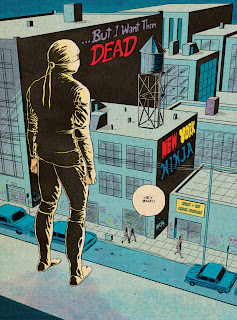 "New York Ninja Super Special," is a superb comic and if you like weird movies or strange comics, you should pick it up. If you love both of those things, then you really should check this out! You can buy a copy via the comic publisher's website, Floating World Comics, or ask your comic shop to order you one. It is definitely worth getting a copy!