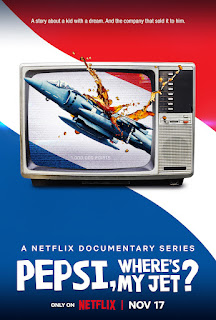 I watched the Netflix mini-series, "Pepsi, Where's My Jet?" over the weekend and it was delightful. The mini-series chronicles over four episodes how a man named John in his 20's sued Pepsi for a Harrier jet back in the 1990s. It was advertised as if it were a part of an ad campaign where you could use Pepsi points to get a t-shirt, glasses, a bag, or (theoretically) a jet. As Pepsi did not advertise the jet as being a joke (at first) this led to a very real case when John submitted money for Pepsi points (with assistance from an investor and friend named Todd) and requested his jet.

The documentary approaches all of this madness with a nice lighthearted tone and is quite fun. At just four episodes it doesn't stretch the story out too much either as interviews with former advertising pros, Pepsi execs, lawyers, and plenty of discussion with John himself. If you don't know whether John eventually got his jet (or money equal to its value) I won't spoil the ending, but even if you do know how everything shook out the story is still worth hearing and seeing in this great little documentary.