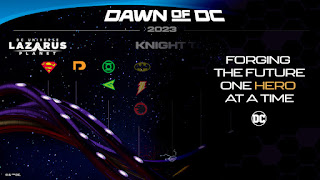 DC has announced a big new slate of titles that will start releasing in January 2023. It is called, "Dawn of DC." I'm pleased that it isn't really an event and the Universe is staying the same so we can avoid having to use the words, "Reboot," or, "Reset," for now. A lot of the comics don't even involve Batman, which is amazing considering how much of DC's output has been Batman-centric lately.

There will be new, "Doom Patrol," "Cyborg," "Green Arrow," "Shazam!" a Green Lantern comic focused on John Stewart, and yes, some titles relating to Batman and his foes such as, "Penguin," and, "Batman: The Brave and the Bold." Still, there will be a chunk of variety and the creative teams that have been revealed are solid. Not every comic sounds interesting, but I'm intrigued by a number of them--"Steelworks," focuses on Steel and his family so that sounds cool, to give one example. It all starts with the new year and continues through 2023, so here's hoping it is good fun.