"The Death of the Justice League," Gives Us That and Little Else

Death in comics means basically nothing (at least in hero-focused stuff). When a character dies the odds are they'll be back. It might take less than even a year or decades, but they return. The saying used to go that nobody stays dead besides, "Bucky, Jason Todd, and Uncle Ben." Then they brought Jason Todd back as the Red Hood, Bucky came back as the Winter Soldier (and Captain America for a time). Uncle Ben remains dead, but seeing as how an alternate-universe version of Gwen Stacy now is a big thing and folks thought she would have to stay dead...who knows about some multiversal Uncle Ben appearing someday? My point is that death in comics is impermanent but if you make that death seem like it matters at least then the death itself can result in some good drama. Should killing your character/s produce some good storytelling, go ahead and do it even though we all know they'll be returning before too long. This leads me to ask, how could a comic about killing a bunch of the Justice League in, "Justice League," #75 feel underwhelming of all things?

I've not been reading the main, "Justice League," comic much, but have been following general summaries of the story and was dipping my toe into the, "Justice League Incarnate," that the main team encounters and works with this issue. Basically, a Darkness is sweeping the Universe and it seems like this is the kind of challenge that can't be beaten. Everyone teams up (the JL, JLI, and other characters who got pulled into the fight such as Black Adam) and a man known as Pariah appears and causes all kinds of trouble along with the Darkness as a bunch of the OG Justice League die. Some get smashed, others are instantly disintegrated, it is supposed to be dramatic, but it is less of a big deal itself than ending with the cliffhanger of, "Read Dark Crisis to see what happens next!" 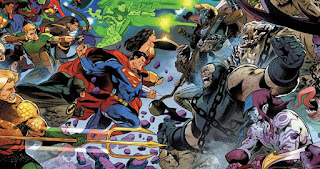 Joshua Williamson is a skilled writer and Rafa Sandoval is an amazing artist. However, they have the unenviable task of taking an issue that is in some ways a big climax of storylines but has to set up an event, and this results in this feeling a bit like the ending half of one story and the beginning half of another instead of its own dramatic thing. I mean, a big chunk of the Justice League is dead, in the main DC continuity! That should be wild! Remember when other comic characters have died how it made National news? This wiping out of a whole bunch of major characters has barely registered a pulse among the media or readers. That's not for lack of Sandoval's stellar art either. He illustrates the heroes fighting the Darkness and those under its control gorgeously. The comic is basically one massive fight scene and thanks to Sandoval it is a stupendous one.

I'm going to guess all or most of these heroes will return during or after, "Dark Crisis." I may be wrong, but I could see that happening--which is fine! As I said, superhero deaths happen as often as the common cold in comic-books. Still, I just wish this felt more like its own dramatic occurrence as opposed to a mix of a blasé ending merged with an attempt to start an event with a, "Shocking," number of deaths.